Mevlut Cavusoglu says Turkey and Germany are set to revive bilateral ties, as relations with the EU improve with the help of constructive steps.

Turkey's Foreign Minister says that Turkish-EU relations are in a more positive place now amid renewed commitment by Turkey and Germany to improve bilateral ties.

Ties between Turkey and the bloc are getting better thanks also to constructive steps from Europe, Mevlut Cavusoglu told a joint news conference with his visiting German counterpart Heiko Mass in the capital Ankara.

On trade between Turkey and Germany, Cavusoglu said last year the trade volume hit $38 billion despite the challenges of the Covid-19 pandemic.

For his part, Mass stressed that he hopes for a deepening of bilateral relations between Turkey and the EU.

He added that Europe may not properly appreciate Turkey hosting millions of Syrian refugees, but it has been a success.

After a year of ups and downs in Turkish-EU ties, Turkish leaders have said they hope for progress this year, and expect the bloc to take clear steps towards this end.

Mass also called on Russia to "immediately" release Russian opposition politician Alexey Navalny, who was detained late Sunday upon returning to the country.

Navalny, 44, had been in Germany for five months after treatment there for poisoning.

The poison which put Navalny in a coma came from a military-grade nerve agent from the Novichok family, which was developed in the Soviet Union and Russia, according to both Germany and France.

READ MORE: Turkey aims to normalise relations with US, EU 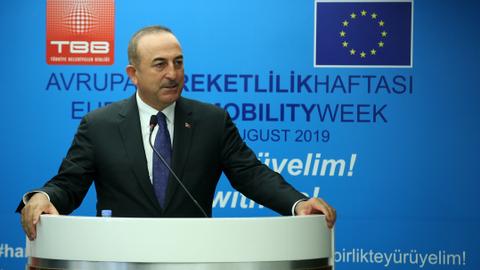