Turkiye's presidential spokesperson has said that western sanctions against Russia over the crisis in eastern Ukraine would only delay underlying problems.

"Sanctions against Russia are useless," Ibrahim Kalin told the German newspaper Welt in an interview published on Sunday, adding it would be better to listen to and understand the strategic concerns of the other side.

Kalin's remarks came after the G7 group of the world's major economic powers urged Russia on Saturday to withdraw troops from the Ukrainian border and pursue a diplomatic solution to the crisis.

"Russia must de-escalate and fulfil its commitments," the foreign ministers of Canada, France, Germany, Italy, Japan, the UK and the US said in a joint statement after their meeting in Munich.

They stressed their preference for a diplomatic solution but also underlined that they are ready to impose severe sanctions on Russia if it violates the territorial integrity of Ukraine.

Western countries have accused Russia of amassing nearly 150,000 troops along the Ukrainian border, prompting fears that it could be planning a military offensive against its former Soviet neighbor.

Moscow has repeatedly denied any plan to invade Ukraine and instead accused Western countries of undermining Russia's security through NATO's expansion toward its borders.

READ MORE: US warns of ‘some global fallout’ from Russia sanctions over Ukraine 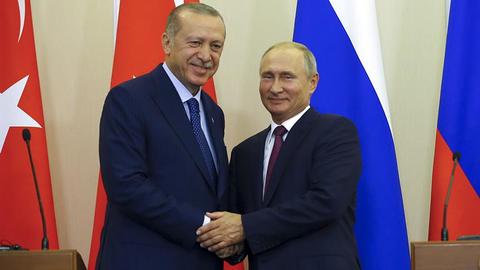 A quick look into Erdogan-Putin diplomacy in 2018