Saudi journalist Jamal Khashoggi disappeared and was killed and dismembered inside the Saudi consulate in Istanbul on October 2. A new book and video allege new details how the Riyadh critic was killed and his body then disposed of.

Almost three months after the killing of Saudi journalist Jamal Khashoggi, video footage from Turkey's A Haber shows the transfer of five suitcases and two black plastic bags from the Saudi consulate in Istanbul to the Saudi consul's residence in the city.

According to the broadcaster, they could have contained Khashoggi's body parts.

The book is titled 'Diplomatic Atrocity: The Dark Secrets of the Khashoggi Murder.' It reveals what its authors claim are new details of the event's leading up to the murder and events related to his death thereafter.

According to the book, new audio recordings reveal information before and after Khashoggi's death and support Ankara's claim that the crime was a "premeditated murder."

As reported by Daily Sabah, the recordings reveal that Khashoggi resisted his killers for five minutes.

According to the recordings, Saudi intelligence official Maher Abdulaziz Mutreb orders five members of the hit squad to suffocate Khashoggi with a nylon bag.

Khashoggi's last sentence reportedly was, "Do not cover my mouth, I have asthma, you will suffocate me."

"Never worked on a warm body"

According to the recordings, the process of dismembering Khashoggi's body after his killing lasts half an hour and was done by forensic expert Salah al Tubaigy, using an autopsy saw.

According to the book, Tubaigy was recorded saying ahead of the killing, "I've never worked on a warm body so far but I can easily handle him."

Members of the hit squad reportedly remained present at the scene and were disturbed and nauseated by the dismemberment of Khashoggi.

However, the book discloses that there is no evidence of how Khashoggi's body was disposed of.

Another revelation the book makes is the identities of two new members of the Saudi hit squad who killed Khashoggi.

Jamal Khashoggi disappeared after entering the Saudi consulate in Istanbul on October 2. He was killed and dismembered inside the consulate. His body is yet to be located.

Saudi officials have offered a range of explanations for the killing. But they deny that the royal family and Crown Prince Mohammed bin Salman were involved, although the US CIA has reached the conclusion that the crown prince likely ordered the hit.

Saudi Arabia has arrested several persons in connection with the killing but is refusing to extradite them to Turkey for trial in Istanbul. 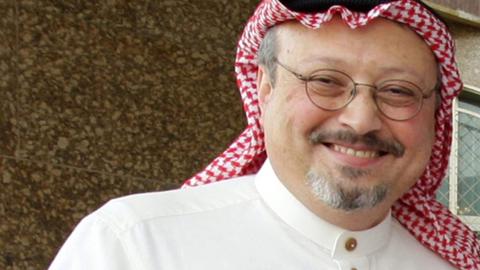 Friends of Saudi dissident worried by absence at Istanbul consulate