Why is Turkey at the heart of the Christchurch terrorist’s anger?

The New Zealand terrorist's manifesto is filled with references to Turkey. Experts see it as an indicator that Turkey is synonymous with Islam in the eyes of Western ultra-nationalists.

While many could hardly shake the dismay from the deadly terror attacks at two mosques that killed 50 people in New Zealand, discussions over the motives of Australian terrorist Brenton Tarrant are now open to debate.

A slew of experts have immersed themselves in analysing the motives and sentiments behind the hideous attack, honing in on the details of the manifesto the assailant posted to his social media right before the attacks took place.

According to the 74-page manifesto, in which the assailant bills himself patently as a racist, the gunman explains his reasons for the attack, ranging from his aspiration to reduce the number of immigrants (he brands them as invaders) to preventing racial replacement (he warns against the declining birth rates of Europeans).

While detailing why he carried out the attack, Tarrant does not eschew calling on white people to follow suit. Among the 15 itemised reasons he provided for perpetrating the attacks was the intent to “drive a wedge between the nations of NATO that are European and the Turks that also make a part of the NATO”.

The assailant also states that Turkey needs to be an adversary of the West, just as it was at other points in history.

Columnist Mahmut Ovur says this mosque attack is “not an ordinary terror incident”. He brands the attacks as an extension of rising Islamophobia, racism and anti-Turkism associated with Islam.

“Even the centrist politicians are under the influence of racism and fascism. And they feed on the historical memory,” Ovur points out, highlighting that this mentality has not forgotten the “Hagia Sophia that dates back to 500 years ago”.

“Now it [the past animosity] has morphed into a new form and the name of the enemy is Islam.”

The Australian terrorist enunciates his views, his motives, his aspirations, his political stance and ideology in his manifesto, blatantly defining himself as a white supremacist, a racist, an ethno-nationalist, an Eco-fascist and a partisan. However, on top of all these, there is a strong indication that the assailant is anti-Turk—although he does not state this explicitly—given that an entire part of his manifesto is dedicated to Turks.

He threatens Turkey in his manifesto, saying: “We are coming for Constantinople [using the historical name for Istanbul] and we will destroy every mosque and minaret in the city. Hagia Sophia will be free of minarets and Constantinople will be rightfully Christian owned once more.”

The Hagia Sophia was originally built as a Christian Church in the 6th Century in Istanbul and was converted to a mosque in 1453 when the Ottomans took the city from the Byzantines. The building is now a museum.

Adil Saribay, head of the psychology department at Bogazici University, sees no surprise in the terrorist’s hatred towards Turkey, as he says that Turks had a strong presence in the historical scene and were perceived as the ‘other’, an enemy and a threat for hundreds of years.

Saribay says that Turks also continue to be significant actors in international affairs, integrated into Western society, something which he says can be even more unsettling for an extremist “who prefers to see the world as black and white and who typically can be vexed at any ambiguity.”

“A racist has clear lines, it is either ‘us’ or ‘them’ for him. So, he has a desire to terminate any ambivalence. In that sense Turkey, among all other Muslims nations, can be the most disturbing one,” Saribay notes.

There are also other details where the gunman reveals his anti-Turkish sentiment. In photographs of his weaponry—which he used to commit the massacre—posted on his now-deleted Twitter account, there are also references to famous historical figures who fought against Muslims.

The most striking one among the names seen on his weapon was Milos Obilic, who killed Ottoman Emperor Murat I during the 1389 Battle of Kosovo. His rifle also contained the names of military leaders who led revolts against the Ottoman state.

Names such as Janos Hunyadi, the Hungarian commander who blocked Ottoman attempts to take Belgrade twice, and Ernst Rudiger von Starhemberg, one of the generals that led the defeat of Ottomans during 1683, the Kahlenberg Battle was also inscribed on the terrorist’s rifle. At the end of this battle, the siege of Vienna ended, and the Ottomans’ withdrawal began.

‘Turkofagos’ (Turk-eater) was also written in capital letters on the rifle, in reference to a nickname mostly used by Greek forces fighting the Ottomans.

A symbol of hate

Before the shooting, Tarrant can be seen in the video driving and playing a song to glorify wartime Bosnian Serb President Radovan Karadzic, who was convicted of genocide over the 1995 massacre in Srebrenica. The song is from a propaganda music video produced by three Bosnian Serb soldiers and played during the livestream of the mosque attack. The song later became a meme known as ‘Remove Kebap’ which alludes to the ethnic cleansing of Muslims.

There was a reference to Turkish President Recep Tayyip Erdogan in the terrorist manifesto as well. Erdogan, in an article he wrote for the Washington Post on Tuesday, said: “The number of times he mentioned both Turkey and myself was both curious and worth deeper consideration.”

The manifesto reads: “This warlord must bleed his last, whilst he visits his ethnic soldiers currently occupying Europe.” The terrorist also asserts that Erdogan’s death would “drive a wedge” between the Turks and Europe.

Enes Bayrakli, director of European Studies at the Foundation for Political, Economic and Social Research (SETA) notes that chopping the number of immigrants of Turkish origin, coupled with historical fears, led those on the far-right to adopt anti-Turkish rhetoric as a mechanism to exacerbate racism in Europe.

“Islamophobia and Turkophobia are two notions that feed on each other. We can easily observe that far-right rhetoric is based on Turkophobia particularly in countries such as Austria, Hungary, Serbia and Germany due to both the historical animosity and the large number of Turks residing there,” states Bayrakli.

Bayrakli also added that Erdogan is a primary reason why some Islamophobic circles in Western society deplore Turkey, given his leadership in the Muslim community.

"Erdogan dares to raise his voice against atrocities committed against Muslims across the world at every chance unlike others, which is why he is becoming a target by extremists”. 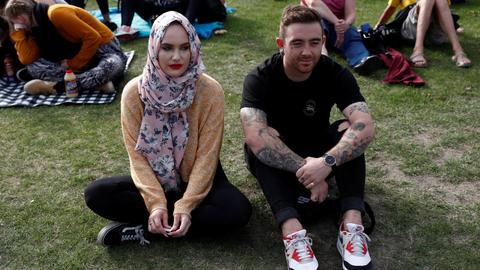 The importance of being an ally in the face of injustice