At least three people, including two soldiers, have been killed as two explosions struck Somalia's capital within a span of a few hours.

Local police official Abdifatah Hassan said that the explosive used in the blast was a roadside bomb that targeted a military official.

He said the senior official managed to escape unscathed, though two of his bodyguards and a civilian were killed.

Local media reported that Somalia's deputy army commander had been the target.

Similarl to other recent attacks in the Horn of Africa country, the Somali-based and al Qaeda-affiliated group al-Shabaab claimed responsibility for that attack.

Another landmine explosion in the Somali capital has targeted a local district commissioner, police said.

The roadside mine targeted a convoy carrying Ahmed Abdullahi Ariif, the commissioner of the Yaaqshiid district, while traveling to the Darusalam village area in Mogadishu, local police officer Abdifatah Hassan said.

"As far as we know, commissioner Ariif and other officials in the convoy escaped unhurt but it is early to say how many people were killed or wounded," he said.

This followed a similar roadside explosion in the capital that targeted a senior military official less than five hours earlier, killing three people including two soldiers.

No group has yet claimed responsibility for the second attack. 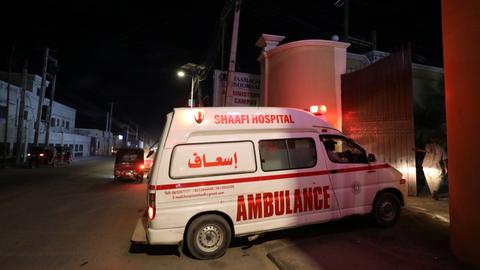