More than 100 people were killed in the latest violence for which there was no immediate claim of responsibility but residents said it was carried out by the herdsmen.

An armed gang has killed more than 100 people in a remote part of northern Nigeria, according to survivors and local authorities.

The attackers targeted four villages in the Kanam area of Plateau State, the authorities said on Tuesday. The incident is the most recent in a series of violent attacks in Nigeria's north.

The assailants arrived Sunday afternoon, ransacking houses and shooting at residents, according to Alpha Sambo, a survivor and Kanam youth leader who is helping those displaced and injured.

“The people that have been killed are more than 100,” he told The Associated Press news agency on Tuesday.

Other witnesses say as many as 130 died and many have been injured and displaced.

The police and the state government confirmed the attacks but did not give details on the cause or number of casualties.

Authorities in Nigeria have in the past been accused of withholding information about death tolls in such killings.

On social media, videos viewed by AP appeared to show razed houses and bodies wrapped in mats and bags in mass graves. Many were buried even before their loved ones heard of their demise, residents said.

While there was no immediate claim of responsibility for the latest violence, residents said it was carried out by the herdsmen.

The assailants "were well-armed” with AK-47 rifles and machetes and arrived on dozens of motorcycles each carrying up to three men, said youth leader Sambo.

Two days after the attack, the Kanam area is still tense and calm has not been fully restored, Dayyabu Yusuf Garga, chairman of the Kanam local government authority, said.

Such attacks in Nigeria’s northern region have become frequent, especially between nomadic cattle herders and farmers.

The conflict over access to land and water has further worsened in Nigeria, Africa’s most populous nation with its 206 million people deeply divided along religious lines.

The West African nation continues to grapple with security challenges in other parts of the country.

A decade-long insurgency in Nigeria's northeast by the extremist rebels of Boko Haram and violence by armed groups in the northwest have led to the deaths of thousands more. 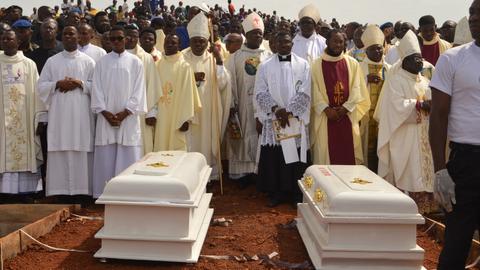