There was no immediate comment from Ethiopia’s government, which has been fighting the Tigray regional forces since a November 4 attack on a military base there.

A university official has said the latest airstrike by Ethiopia’s military struck the school in the capital of the defiant Tigray region and caused major damage, while the United States says neither side in the conflict is heeding calls for de-escalation.

The senior official described Thursday’s airstrike in an email shared with The Associated Press. It was not immediately clear if anyone was killed or wounded in the airstrike in Mekele.

“How on earth” can a government bombard its own people, the senior official asked. The AP is not naming the official because they could not be reached directly.

There was no immediate comment from Ethiopia’s government, which has been fighting the Tigray regional forces since a November 4 attack on a military base there.

Both sides have carried out airstrikes. Each regards the other as illegal, the result of a falling-out between Nobel Peace Prize-winning Prime Minister Abiy Ahmed and the Tigray leaders who once dominated the country's ruling coalition.

The World Health Organization's director-general on Thursday denied an allegation from his own country, Ethiopia, that he was lobbying neighbouring nations to provide arms and other support to the defiant Tigray region, which has been clashing with the Ethiopian government for two weeks.

“There have been reports suggesting that I am taking sides in this situation," WHO Director-General Tedros Adhanom Ghebreyesus said in a statement. "This is not true, and I want to say that I am on only one side and that is the side of peace.”

Tedros added, “My heart breaks for my home, Ethiopia.” He recalled seeing war as a child and its “terrible human toll,” and he joined international calls for an immediate de-escalation.

He replied a day after Ethiopia’s army chief made the lobbying allegation without citing any evidence. General Birhanu Jula told reporters that the WHO chief had urged unnamed neighbours to “oppose the war and for (the Tigray People’s Liberation Front) to get arms.”

I have worked w @DrTedros for years, promoting #PrimaryHealthCare, ensuring #patientsafety & now, fighting #COVID19; He has always lived this sentiment - that whole world needs
Health for peace &
Peace for health.
As global citizens, a plea to only "report" facts w evidence https://t.co/FxEtFinGzk

With communications to the region severed, no one knows how many people have been killed, and verifying either side’s claims is challenging.

“At this point, neither party, from what we hear, is interested in mediation,” the top US diplomat to Africa, US Assistant Secretary of State Tibor Nagy, told reporters on Thursday evening.

Nagy said of the airstrike: “From what you say, I certainly hope it’s not true.”

Alarmed by the potential for disaster in Ethiopia and beyond, 17 US senators urged Secretary of State Mike Pompeo in a letter Thursday to engage Abiy directly to push for an immediate cease-fire.

Asked about efforts to open humanitarian corridors, the US ambassador to Ethiopia, Michael Raynor, told reporters that the TPLF “did not really engage on that possibility.” Meanwhile, a senior Ethiopian official, Redwan Hussein, said the government plans a fact-finding mission into the humanitarian situation that “will not take more than a week.”

Nagy told reporters that the US has been in contact with Eritrean officials to urge their “continued restraint.”

“Internationalising the conflict, that is one absolute danger that we are doing our best, the entire region is doing its best, to avoid,” he said.

Ethiopia's government has said it is marching in a final push to Mekele, the Tigray capital, with the goal to arrest the ruling “clique” from the region's Tigray People's Liberation Front. The TPLF infuriated Abiy's government when it objected to the pandemic-related postponement of national elections until next year and held its own election in September.

Now, deadly fighting continues in a heavily armed region of some 6 million people, a clash some observers have compared to an inter-state war at the heart of the strategic Horn of Africa.

While Abiy's government rejects urgent international calls for dialogue, a humanitarian disaster is unfolding as food, fuel and medical supplies run desperately short in the Tigray region. Roads are blocked and airports closed.

READ MORE: What is behind the ethnic divide in Ethiopia?

Thousands of people have been forced to flee Ethiopia’s Tigray region into Sudan. They fear for their lives and the lives of their families.

🚨 Lifesaving assistance is urgently needed. Here’s how you can help: https://t.co/Gqjv1rROZv pic.twitter.com/4Ur3eyKaMQ

More than 30,000 refugees have fled to Sudan, and the fighting has moved close to nearly 100,000 refugees from Eritrea at camps in northern Tigray.

“Electricity continues to be cut off. Fuel for generators has run out. That leaves 96,000 Eritrean refugees in Ethiopia without clean water,” United Nations spokesman Stephane Dujarric told reporters.

"A staggering number of people are crossing from Ethiopia into Sudan. Every. Single. Day," the UN refugee agency tweeted.

Refugees in Sudan said the fighting erupted so quickly they barely knew what they were fleeing.

“We didn’t know about war or when did it start,” said one, who gave her name as Terhas. She said that on the way to Sudan with her children, “we saw a lot of dead bodies,” while upon their weary arrival, “we didn't find food.”

Nearly half of the refugees are children, and the UN called the conditions they are facing “extremely harsh."

The fighting also threatens to suck in or destabilise Ethiopia's neighbours, which include Sudan, Somalia and Eritrea, whose capital came under rocket attack from the TPLF over the weekend. Eritrea has remained largely silent while the TPLF accuses it of entering the conflict at Ethiopia's request.

A staggering number of people are crossing from Ethiopia into Sudan.

🚨 We need your help to reach the most vulnerable: https://t.co/Gqjv1rROZv pic.twitter.com/4ADkTB0bci 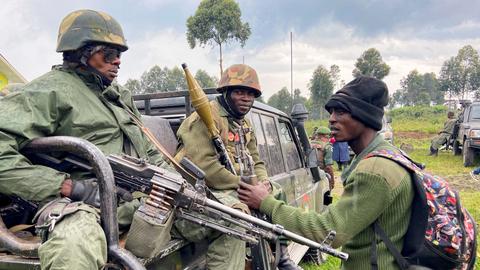