The two countries are wrangling over the ownership of energy-rich blocks in the Indian Ocean and waiting for the ICJ to resolve the conflict.

Kenya and Somalia were involved in a bitter diplomatic spat after the Horn of Africa nation allegedly auctioned off oil, gas and mineral blocks falling within the disputed territory.

Kenya termed the decision by Somalia to auction the disputed maritime blocks in the UK as an “unparalleled affront” and vowed that the “illegal grab” will not go unanswered, a charge Somalia denies.

Ever since the maritime dispute gained traction, Kenya has maintained that it would prefer to resolve the boundary issue out of court, while Somalia wants the case to be heard by the International Court of Justice (ICJ).

In August 2014, Somalia filed a case before the ICJ at The Hague over a dispute in relation to “the establishment of the single maritime boundary between the two neighbouring countries in the Indian Ocean delimiting the territorial sea, exclusive economic zones and continental shelf beyond the 200 nautical miles".

Somalia wants the maritime border to run diagonally as an extension of the land boundary while Kenya wants it to run parallel to the latitude, eastwards and in the border town of Kyunga.

A maritime border determines exclusive rights for countries over energy resources beneath the sea and any dispute over the demarcated lines usually land in the ICJ.

Speaking to TRT World, Senior Researcher at the Institute for Security Studies Timothy Walker said: "The ICJ has a long history of determining the location of maritime boundaries and thereby providing a solution to a dispute over exclusive economic rights, but this is usually as a last resort by the states involved.

‘’It should always be asked if they have exhausted all possible institutions and dispute resolution mechanisms before taking the case to the ICJ and requesting their verdict. The ICJ decision is binding and there is no appeal, and in this case it is a 'zero-sum' result where one side will benefit at the expense of the other.” Walker added: “Kenya's proclamation of the maritime boundary in 1979 could be significantly altered, resulting in a huge swathe of this oceanic area passing into Somali jurisdiction.”

Could the Kenyan government's decision to engage in a diplomatic escalation against Somalia backfire?

"The disagreement has not erupted into further acrimony is a positive sign and hopefully both states will await the verdict of the ICJ without further undertaking actions that could antagonise the other," Walker explained.

"It is a notable trend in matters of sovereignty, increasingly involving the seas, for debates to become inflamed and aggressive. States should rather be exploring ways of mutually benefitting from resources and development opportunities".

So far Somalia has denied auctioning any oil and gas in the disputed territory. The Somali government recently issued a statement to confirm that it has no plans to “offer any blocks in the disputed maritime area until the parties' boundary is decided by the ICJ”.

And when it does, the government said: "Somalia will fully respect the decision and comply.”

The Kenyan government later denied expelling the Somali envoy and recalling its ambassador amid the diplomatic row over the disputed territory. It said it only recalled its envoy for “consultations” and asked the Somali envoy to depart for the same reason.

Several people took to the social media to express their feelings about the diplomatic row.

FYI For the record we did not “recall” our Ambassador nor “expel” Somalia’s . We summoned ours for consultations and asked that theirs departs for consultations on their side so that we can resolve this matter with credible and correct information from both sides.

So you jumped the gun without "credible and correct information.." ?

what a story. its dump to say things like these. the letter given to local Somalia Amb. was just good enough. Kenya's claim to Somalia territory is in court. No out of court negotiation. any Somalia authority, person or Government who takes Kenya off the hook is guilt of Treason

FYI You mean you can’t consult while the Ambassadors are in respective places. Mr Kamau stay firm to your decision. Don’t wake up a sleeping lion 🦁.

The quarrel over the oil blocks has strained otherwise close ties between the two countries. Kenya hosts the largest population of Somali refugees and has troops serving in the Africa Union Mission in Somalia (AMISOM), which is helping the government led by President Mohamed Abdullahi Farmajo battle the Al Qaeda-linked armed group, Al Shabab.

With the stakes so high, it remains to be seen how long the two countries can afford to remain estranged with each other. 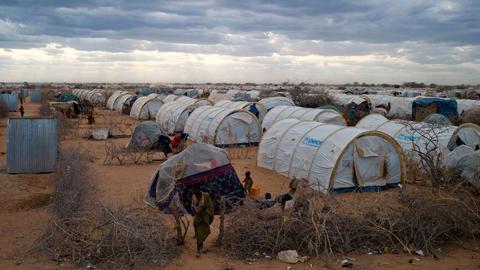