The trend of carrying out kidnapping for ransom as a profession has been on a rise in the Democratic Republic of the Congo, a resource-rich country which is suffering from one of the most complicated humanitarian crises in the world.

Struggling with severe poverty, long-lasting bouts of violence, human rights violations from various militant groups, government forces and UN peacekeepers alike, the people of the Democratic Republic of the Congo are having to endure another wave of suffering in the form of rising kidnapping for ransom cases in the country's eastern provinces of North and South Kivu.

Kidnappings in the DRC first skyrocketed in 2015 when at least 175 people were kidnapped for ransom. Since then there has been a steady increase in the cases reported.

According to the Kivu Security Tracker, more than 700 people have been kidnapped for ransom since the beginning of 2018 in the DRC. The rate of kidnappings and abductions in North and South Kivu's provinces alone is comparable to the sum total of kidnappings in entire countries.

While in some instances children were abducted from their homes, schools or roads to be recruited as child soldiers, the trend of carrying out kidnapping for ransom as a profession has been on a rise.

Kidnapping children for ransom is relatively a new concept in the DRC where since April in 2017, more than 300 children have been kidnapped and nearly 100 of them were killed.

An HRW report further revealed that kidnappers also targeted some international aid workers (contract staff) working for the United Nations, but most of whom were released. It was not clear if any ransom was paid. Other victims have included poor farmers, priests as well as tourists.

With at least 70 militant groups believed to be active in the country, it is difficult to ascertain as to who is responsible for the kidnappings but officials state that poverty and unemployment stemming from unending conflicts are driving people to extreme behaviour.

The weak economic situation in the DRC is generally seen as the main reason behind the rising kidnappings, but political turmoil, lawlessness and an environment of impunity have further compounded the issue and made it more widespread across the country.

The May 2018 kidnapping of British tourists in the Virunga national park in north of Goma, the capital of DRC’s North Kivu province, was just a recent example of the issue and also shines a spotlight on the widespread use of kidnapping in eastern Congo in general.

Within the period of two weeks following the Virunga national park incident, at least 20 more people were reported to have been kidnapped for ransom.

Most attacks – kidnappings – according to the Kivu Security Tracker (KST)’s report, take place on a busy road in Goma where the Congolese national army has a heavy presence. The KST report further says the kidnappings are carried out by unknown groups who have either former members of the army or have connection with militant groups.

Kidnap for ransom targeting the local populace has dramatically increased in the region. While perpetrators generally demand ransoms between $1,500 to $20,000, locals are hardly able to afford the amount. The KST’s map shows that in some cases, poorer residents are kidnapped for a ransom of around $100.

What makes the situation even worse is the fact that local people are afraid of giving information or speaking about the issue due to the continued threat from militant groups. And the DRC government is in most cases unable to tackle the issue.

However, the eastern part of the DRC is not the only region – there has also been an increase in violence in Kasai region in the country since 2016 following the death of a local customary chief, causing spread of conflict between the military and militant groups.

This has worsened the already weak political environment in the country and given a rise to criminal groups.  And the situation is getting more desperate.

A Guardian article cites an official from Goma town, the capital of North Kivu province, saying people are even setting up fake kidnappings through which they can demand money from their relatives.

While political and economic turmoil in the Democratic Republic of the Congo has been worsening the humanitarian situation, the plight of eastern parts of the country – North and South Kivu – are facing more threats due to heavy presence of militant groups. KST reports say that nearly 140 armed militant groups are active in the North and South Kivu provinces and violence continues to be widespread across the two provinces.

The problem in the DRC is not just limited to eastern Kivu's provinces. Since August 2016, the Kasai region has seen one of the most dramatic escalations of violence in Congolese history after the army killed a local leader in 2016.

Although the conflict has decreased in the Kasai region, an International Refugee Rights Initiative (IRRI) report shows that the humanitarian crisis resulted in a large-scale displacement. Around 762,000 people are displaced within Kasai Province.

Kidnappings are apparently lucrative for the perpetrators, and impunity increases the issue by giving more space to armed militant groups as prosecution rates remain low.

Moreover, the lack of strong political authority serves as encouragement for further attacks in the country.

"We are witnessing a new scourge (...) it's a new business," said Julien Paluku Kahongya, the governor North Kivu in a 2016 interview with AFP which shows the fragility of Congolese authorities against the prevailing kidnappings issue.

The roots of crisis in the DRC

Democratic Republic of Congo is an extremely resource-rich country that is similar in size to the Western Europe. The central African country is the largest source of cobalt in the world and the largest exporter of copper from Africa.

The violence in the country has often been fuelled by its mineral wealth estimated to be worth more than $24 trillion and including an abundance of resources including diamonds, gold, zinc, coltan, lithium and germanium.

As is the case for many conflict-ridden and underdeveloped countries in the world today, the roots of the crisis in the DRC are also found in its colonisation by a European power in the 20th century.

Millions of Congolese are estimated to have died and millions of others enslaved when the country was decimated and plundered first between 1885 and 1908 when Congo was first a personal fiefdom of King Leopold II in the late 19th century and then when it eventually become a colony of the Belgian state till 1960.

Patrice Lumumba came to power after the country won independence from colonial ruler Belgium in 1960.

During its struggle for independence in the 1960s, the vast country almost disintegrated as its regions fought each other. Lumumba's government was overthrown in a coup led by Joseph-Desire Mobutu, the young head of Congo’s army, and assisted by Belgium.

Under the Mobutu regime, the vast central African country was plagued by corruption.

In 1994, the assassination of Rwanda's Hutu president, Juvenal Habyarimana, was followed by a genocide in the DRC's neighbouring country that caused another wave of conflicts that lasted for nearly 10 years.

Nine African countries and around 25 armed groups became involved in the conflict that lasted until 2003, and is considered as the deadliest conflict in African history.

The war which is also named as the Africa’s World War claimed 5.4 million lives through violence, disease and starvation.

Although the war was declared over in 2003, the security situation has continued to deteriorate in eastern DRC, in particular in the provinces of the Haut-Katanga, Kasai, North and South Kivu and Tanganyika, due to continuous fighting between armed groups, militias and the army.

Along with the economic challenges most people are facing in the DRC, security issues are the core reason causing the increase in kidnappings.

The DRC, where 63 percent of population lives under the poverty line, has also been suffering from a variety of problems such as health issues, a poor education system and high unemployment.

Up until now, according to the Congolese authorities, 43 Ebola cases have been reported, including 33 deaths.

The DRC has dealt with Ebola for decades and the Ministry of Health declared the tenth outbreak of the deadly virus in North Kivu Province on 1 August 2018.

Ebola, first identified in the country in 1976, jumps to humans from animals including bats and monkeys. There is no specific treatment, and the virus can be fatal in up to 90 percent of cases, depending on the strain.

A UN report reveals that there are nearly five million internally displaced people in the DRC with more than 12 million school-aged children who are in need of a proper education system. 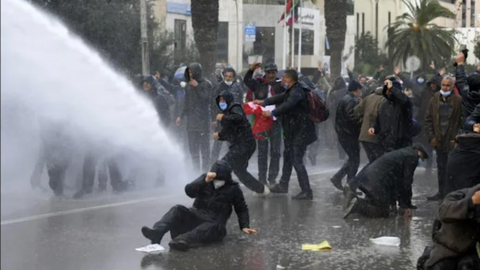