Libya's UN-recognised government has disavowed a visit by French philosopher Bernard-Henri Levy, a champion of the 2011 ouster of the longtime ruler Muammar Gaddafi, whose standing has plummeted since the uprising.

"The government has not officially invited any journalist to visit Libya," Bashagha said on Twitter.

He accused certain parties of fishing in troubled waters "to set political scores."

"A visit by a journalist without an official invitation from the government has no political overtone and the public opinion has the absolute right to react to any public event," the minister said.

Across Libya, the euphoria of the NATO-backed rebellion has long since faded as fighting has raged on between feuding militias, and Tripoli and an illegal militia led by warlord Khalifa Haftar.

In the government-held west of the country, France is widely resented for the support it has given to warlord Haftar.

Levy enjoys celebrity status in France, but he is unpopular in the Arab world because of his staunch support for Israel.

He told pro-government TV channel Libya Al Ahrar that he had travelled to the country as a journalist to write a piece for the Wall Street Journal.

Levy said he planned to visit the town of Tarhuna, where government forces uncovered a mass grave they say contains the bodies of civilians executed by Haftar militias.

Fighters loyal to the government said they had prevented Levy from entering Tarhuna on Saturday.

But in tweets accompanying photographs of himself flanked by masked gunmen in military uniforms, the French celebrity philosopher said he had visited the "killing field" in Tarhuna where 47 people, including children, had "suffered martyrdom from pro-Haftar proxies."

"Just after my reportage on the killing fields. These are the true Libyan police who protect free press. So different from the thugs who tried to block my convoy on my way back to Misrata," he wrote in a caption.

He said a full account of what happened would be published soon.

A programme published by Libyan media showed that Levy planned to visit the capital Tripoli on Sunday for talks with Interior Minister Fathi Bashagha.

But the office of Prime Minister Fayez al Sarraj denied "any connection" to Levy's visit and said it had opened an inquiry to establish how it had come about and to take "deterrent measures" against its organisers.

Khalid al Mishri, chairman of the Libyan High Council of State, said he was surprised by Levy's visit to the city of Misrata, and called for an investigation to determine the authority that invited him into Libya.

Libya has been torn by civil war since the ouster of late ruler Gaddafi in 2011.

Libya's new government was founded in 2015 under a UN-led agreement, but efforts for a long-term political settlement failed due to the offensive by warlord Haftar’s militias.

The UN recognises the Libyan government headed by PM Sarraj as the country's legitimate authority. 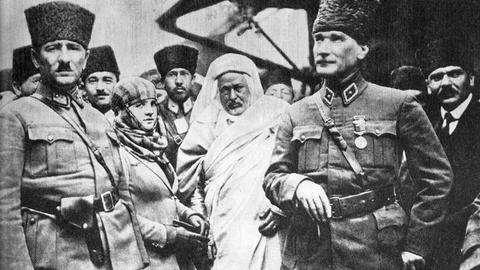