Fatalities were caused by police firing on protesters in eastern Democratic Republic of Congo. A senior UN official responded to the protests and attacks against peacekeepers and Ebola health workers, saying they were planned, organised and funded.

A young man was killed and five other people were wounded on Monday in a new protest against UN forces in the eastern Democratic Republic of Congo (DRC), an AFP news agency reporter said.

The reporter said police repeatedly fired warning shots in a bid to disperse a new protest.

He then saw a corpse being taken to Beni hospital by fellow protesters. The head of the hospital morgue confirmed that the body had been fatally wounded by gunfire.

Demonstrations have erupted in the city of Beni, where local people accuse the UN force MONUSCO of failing to protect them against a notorious militia, the Allied Democratic Forces (ADF).

Eastern DRC has been troubled for years by militias that control swathes of territory and exploit its mineral wealth.

The DRC army launched operations against the ADF at the end of October. In response, the ADF has carried out massacres in an apparent bid to discourage civilians from helping the military.

Another 27 people were hacked to death on Wednesday, bringing the number of people killed in militia violence in and around Beni to 107 since November 5.

UN in the line of fire

The mounting toll has sparked anger, which is being channelled especially against MONUSCO, one of the biggest UN peacekeeping operations in the world.

But it has been struggling in a vast country beset by armed groups as well as an Ebola epidemic, poverty and poor governance.

At least eight people have been killed in anti-MONUSCO demonstrations since November 23, according to an AFP toll.

A protest strike in Beni on Monday was widely observed. No shops opened for business and all other activities seemed to be paralysed.

On Saturday, a crowd in Beni lynched two people they suspected of being ADF members, a day after a soldier was killed in Oicha, 30 kilometres away, by a mob who mistook him for an ADF fighter.

At the funeral of Belinda Kasongo, 30, vaccinator, statistician, one of Congo’s brightest, who gave her life to stop Ebola’s spread. Her murder comes at a time of heightened hostility toward foreign health & peacekeeping interventions here. The victims are almost all Congolese. pic.twitter.com/82RNEwGJJx

On Monday, the overall head of UN peacekeeping operations, Jean-Pierre Lacroix, stirred controversy by saying there was evidence that anti-MONUSCO protests and attacks on Ebola health workers had been planned, organised and funded.

"When I say that, it's not to play down the frustrations of the public, who are suffering. We all understand this frustration," Lacroix told the French radio station RFI at the end of a three-day visit.

"At the same time, there are acts which have been premeditated, organised and financed."

A prominent grassroots group, Lucha ("Struggle for Change"), said the protests had been spurred by "MONUSCO's lethargy."

Lacroix's remarks "are a denial of responsibility and a contemptuous way to ignore the frustrations of the public," it said on Twitter.

In its defence, MONUSCO has pointed out that the DRC army offensive was ordered unilaterally, and that it has no authority to launch operations by itself.

The group has plagued the North Kivu region bordering Uganda since the Congo Wars in the 1990s, although its membership has since broadened to non-Ugandans and it has not carried out an attack on Uganda for years.

According to an independent non-profit organisation called the Congo Research Group, the ADF has killed more than 1,000 civilians since October 2014. 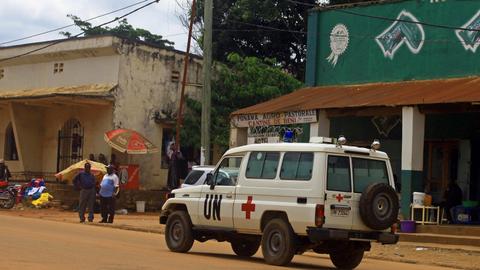