Security agencies ordered to arrest anyone who claims membership in Islamic Movement of Nigeria led by Sheikh Ibrahim el Zakzaky, detained since 2015 following a clash his followers had with troops.

Nigeria on Tuesday announced an official ban on the Islamic Movement of Nigeria, an umbrella body for the country's largest Shia group, warning its members may now be prosecuted for terrorism.

Police chief Mohamed Adamu ordered security agencies to arrest anyone who claims membership in the group led by Sheikh Ibrahim el Zakzaky, who has been detained since 2015 following a clash between his followers and troops.

Over 350 Shia members died in the brutal crackdown after they blocked the convoy of the Nigerian army chief Yusuf Buratai.

"Shia members will henceforth be treated as terrorists and enemies of the state," Adamu said at a police conference in the capital Abuja, a few days after the country's federal high court judge approved a government proposal to ban the group.

"All forms of procession or protest by the movement are now illegal and thus banned."

"The government should seek to reverse the ban, which prohibits the religious group’s members from exercising their right to meet and carry out peaceful activities."

Less than a week after #Nigerian police violently cracked down once again on peaceful protesters of the Shia Islamic Movement in Nigeria (IMN), killing at least 12 people, a court has ordered the government to ban the group. @aniewang @hrw https://t.co/IOXF0Wd5ge pic.twitter.com/T61GS52nKk

The top cop said the members may now be tried under Nigeria's terrorism law.

The ban was enacted after several violent protests Shias have staged in Abuja, culminating in multiple deaths, including a top police officer and journalist.

Nigeria's President Muhammadu Buhari had said he would not tolerate anyone challenging the country's sovereignty or constituting itself to a state within a state — a statement many have interpreted to refer to Shias' alleged disrespect for the authorities. 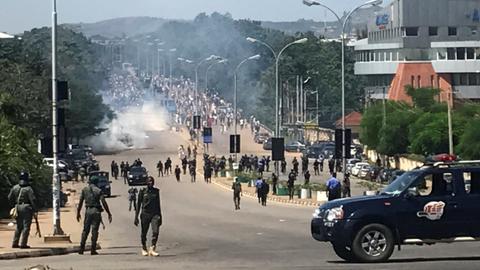