No one claimed responsibility for the attack in the commune of Fada N'Gourma, around where the army is carrying out a search operation.

Gunmen have stormed a cattle market and opened fire in an eastern Burkina Faso village, killing at least 20 people and injuring many others, a local government official said.

The attack in Namoungou village on Friday is being investigated, said Saidou Sanou, the governor of the eastern region, who urged people to be vigilant and to closely collaborate with the army.

"Unidentified armed individuals burst into a cattle market in Namoungou village in the region of Fada N'Gourma and attacked the population," Sanou said in a statement.

"According to an initial toll, around 20 people have been killed and numerous others wounded."

Eleven clashes have already taken place during the first week of August, according to an internal security report for aid workers seen by The Associated Press.

Residents in the region’s last safe haven of Fada N’gourma town, where some tens of thousands of displaced people have also sought refuge, worry the violence is inching closer.

Friday’s attack was only 25 kilometres (about 16 miles) away. Militants killed a cattle breeder in a village about 15 kilometres away earlier this week, according to residents. Local defence forces are also typically active in the area and have been accused by rights groups of killing civilians they accuse of supporting militants.

Analysts warn the unrest is going to get worse.

“With a major humanitarian crisis, a swell in militant activities in multiple parts of the country, coupled with the incompetency of security forces, the picture looks quite grim,” said Laith Alkhouri, an intelligence specialist who researches violent extremism in West Africa. 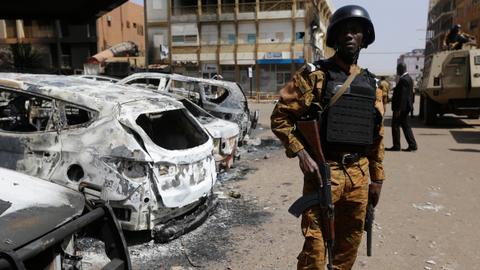