The West African country will hold a run-off vote for president on March 27 after neither of the two front runners secured an outright majority in the first round.

Sierra Leone's election to pick outgoing President Ernest Bai Koroma's successor will head to a run-off later this month after neither of the two front runners secured an outright majority in the first round, the electoral commission said on Tuesday.

Opposition leader Julius Maada Bio of the Sierra Leone People's Party (SLPP) led the field of 16 candidates with 43.3 percent in the first round of the vote, held last Wednesday, according to results announced by the commission in the capital Freetown.

Maada Bio, who briefly ruled the West African country as head of a military junta in 1996, will square off against first-round runner-up Samura Kamara of the ruling All People's Congress (APC), who took 42.7 percent.

The run-off will take place on March 27, the commission said.

The threshold to win in the first round was 55 percent.

A breakdown of the first 75% of progressive Presidential election results can be accessed at: https://t.co/gu9mVAr4Hh pic.twitter.com/3lJlQwKUQC

Peaceful vote in a moribund economy

Koroma is stepping aside after his maximum two terms in office.

The largely peaceful vote to replace him came as a relief for the country of seven million people, which endured a brutal, diamond-fuelled civil war in the 1990s.

But the winner will face pressure to revive a moribund economy that has been ravaged in recent years by low prices for its main export, iron ore, and an Ebola outbreak.

Kamara, a career politician and economist by training, is the outgoing president's hand-picked successor.

He served as the country's foreign minister until last year when he stepped down to pursue his bid for the presidency under the flag of the ruling party.

The retired brigadier spent time studying in the United States and is known for his outspokenness, calling Chinese infrastructural projects "a sham with no economic and development benefits to the people."

After Bio hit out at corruption on the campaign trail, Kamara accused the SLPP candidate of stealing $18 million during his three months in power, though his APC opponent faces corruption allegations of his own. 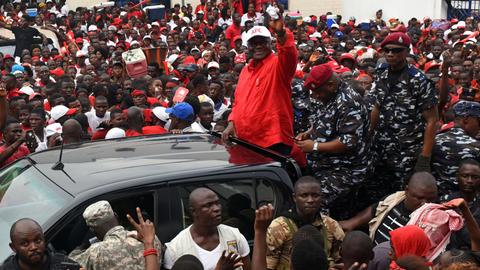