1
Thousands of DRC churchgoers join marches against violence in east
2
More than half of Ethiopia's Tigray rebels withdraw from frontlines: TPLF
3
Flash flood in South Africa kills several at religious gathering
4
South Africa's Ramaphosa will not stand down as head of ANC party
5
Graft-accused Ramaphosa's political fate hangs in balance in South Africa

A bill that would toughen anti-smoking legislation in South Africa has been submitted to parliament for review by lawmakers, a health ministry spokesman said on Wednesday, as a campaign against the proposed changes intensifies.

It is opposed by some businesses, including Japan Tobacco International (JTI), which paid for a radio advert aired this month that encouraged the public to protest against the proposals, published by the Department of Health in May.

“Everything has been taken into consideration. What WHO and our country are saying is that it is important for us to make sure that we have a healthy workforce,” he said.

Smoking rates are high in South Africa, where estimates link tobacco to more than 40,000 deaths a year.

As with previous changes to tobacco legislation in South Africa and around the world the bill is facing a backlash from businesses who may suffer from tougher anti-smoking rules.

“What if your loved one got put in jail because they smoke? It is just one step of the bill controlling your lifestyle choices. Join us in saying #HandOffMyChoices,” the radio advert broadcast by 702 Talk Radio and funded by JTI says.

The radio station confirmed to Reuters News that Japan Tobacco International had paid for the advert.

Website www.handsoffmychoices.co.za/ says the site and campaign are owned and operated by JT International South Africa. JTI did not respond to several requests for comment about the advert and the #HandOffMyChoices campaign.

The Tobacco Alcohol and Gambling Advisory Advocacy and Action Group (TAG), which campaigns for tobacco control, has said it will make a complaint to regulators about the radio advert, which it believes breaches laws on tobacco advertising. Another pressure group, the National Council Against Smoking, has also criticised the advert.

A group of business associations representing nearly 20,000 restaurants, taverns and small business traders and consumers have also said they oppose the bill, saying “over regulation” will affect jobs and the economy.

They also say it will criminalise small businesses that sell tobacco products and that the proposed fines are excessive.

“When people get sick, the tobacco industry is not there to foot the bill. It is public health that does because these people end up in public institutions.” 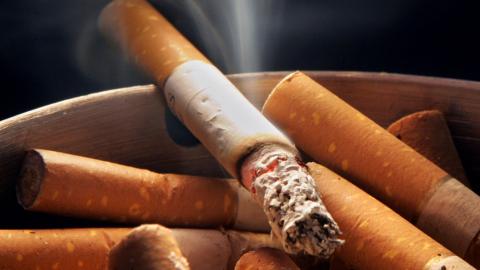 1
Thousands of DRC churchgoers join marches against violence in east
2
More than half of Ethiopia's Tigray rebels withdraw from frontlines: TPLF
3
Flash flood in South Africa kills several at religious gathering
4
South Africa's Ramaphosa will not stand down as head of ANC party
5
Graft-accused Ramaphosa's political fate hangs in balance in South Africa