At least six people died amid violence and rioting as the Constitutional Court heard an application to review its landmark decision to jail former president Jacob Zuma for contempt of court.

South Africa has announced it is deploying troops to two provinces, including Johannesburg, after unrest sparked by the jailing of ex-president Jacob Zuma led to six deaths and widespread looting.

The violence raged on Monday as the Constitutional Court was hearing an application to review its landmark decision to jail Zuma for contempt of court. An announcement is expected later.

Zuma was sentenced for defying a constitutional court order to give evidence at an inquiry investigating high-level corruption during his nine years in office until 2018.

The decision to jail him resulted from legal proceedings seen as a test of post-apartheid South Africa's ability to enforce the rule of law, including against powerful politicians.

In the virtual hearing, Zuma's counsel asked the court to rescind his jail term, relying on a rule that judgements can be reconsidered if made in the absence of the affected person or containing a patent error.

KwaZulu-Natal was hit hard by protests over the weekend, and on Monday flames could be seen coming from the roof of a shopping centre in provincial capital Pietermaritzburg as hordes of people rushed in to loot.

In Eshowe, a town near Zuma's Nkandla home, police opened fire to disperse crowds after a supermarket was ransacked early on Monday.

Police said some sections of a major road in Johannesburg had been closed because of the protests.

Dozens of cars were torched over the weekend in Johannesburg and KwaZulu-Natal, where protests erupted a day after Zuma was imprisoned on Thursday.

Police said dozens have been arrested.

Police said that at least 10 people have been killed and more than 490 arrested amid escalating violence during the rioting.

South Africa's army said it was deploying troops to two provinces, including Johannesburg, to help crush mob violence and looting.

"The South African National Defence Force (SANDF) has commenced with pre-deployment processes and procedures in line with a request for assistance," the military said in a statement.

Personnel will "assist law enforcement agencies deployed in Gauteng and KwaZulu-Natal provinces respectively to quell the unrest that has gripped both Provinces in the last few days," it said.

Please share this so the world can know what is happening in South Africa right now... The #Fakenews #MainstreamMedia won't share this. Please share with all your family and friends overseas and ask them to share it. Our country is burning and the #Media is not reporting it.. pic.twitter.com/X18k3rsJjL

The looting followed a weekend of unrest by protesters, mainly been concentrated in Zuma's home province of KwaZulu-Natal (KZN), with some spilling into the main commercial city of Johannesburg.

Television channels showed footage on Monday of a blaze at a mall in Pietermaritzburg, in KZN.

The channel said the highway leading to the city had been closed to prevent further violence.

A police spokesperson did not immediately respond to a request for comment.

Zuma's core supporters, echoing his position, say he is the victim of a political witch hunt orchestrated by allies of his successor, President Cyril Ramaphosa.

Ramaphosa said on Sunday there was no justification for violence and that it was damaging efforts to rebuild the economy, damaged by the Covid-19 pandemic.

NEW - Violence and looting sprees erupted in parts of central #Johannesburg today. A scene from Hillbrow shows the aftermath.pic.twitter.com/46sPJUNQ6l

Zuma's jailing marks a significant fall for an important figure in the liberation-movement-turned ruling party, the African National Congress (ANC).

He was once jailed by South Africa's white minority rulers for his efforts to make all citizens equal before the law.

The corruption inquiry that Zuma has refused to cooperate with is examining allegations that he allowed three Indian-born businessmen, Atul, Ajay and Rajesh Gupta, to plunder state resources and peddle influence over government policy.

He and the Gupta brothers, who fled after his ouster and are believed to be living in Dubai, deny wrongdoing.

Zuma also faces a corruption case relating to a $2 billion arms deal in 1999 when he was deputy president.

He denies the charges in that case.

Arrest warrant issued for South Africa's Zuma, suspended until May 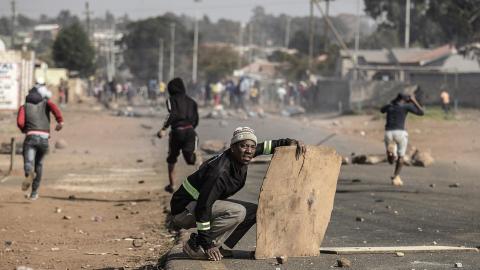