The remarks from Chief of Police Lt. General Khalid Mahdi Ibrahim came a day after at least 15 people were killed by live fire during demonstrations against the October 25 coup.

Sudan’s police chief has defended his security forces, saying they use only legal means to contain anti-coup protests.

Thursday's remarks by Chief of Police Lt. General Khalid Mahdi Ibrahim came a day after doctors said at least 15 people were killed by live fire during demonstrations against the October 25 coup — the highest daily count of people killed since the takeover.

Speaking to reporters in Khartoum, Ibrahim insisted that police are protecting civilians and primarily use tear gas to contain violence at the protests.

He repeated claims that there have also been police casualties and promised investigations into any deaths, civilian or other.

Ibrahim's statements contradict accounts from those at the protests and doctors who have been treating the wounded.

Protest leaders in Sudan have repeatedly called on demonstrators to abide by nonviolent tactics in their attempt to halt the coup.

Security forces, including police but also military, and also the country’s paramilitary forces known as the Rapid Support Forces have faced off with protesters since the coup, trying to stop their marches.

Wednesday's fatalities occurred in mostly in Khartoum's district of Bahri, and the Sudanese capital's twin city of Omdurman, according to the Sudan Doctors Committee.

The deaths brought the overall death toll since the coup to at least 39. Hundreds have also been wounded, the committee says.

In one instance, video from the protests showed a member of the security forces raising a rifle in the direction of protesters.

Blood stained the asphalt on a Khartoum road. Injured and bleeding protesters could also be seen being ferried away by cars from areas of confrontation.

Another video, circulated online, shows protesters standing in an open field before they are dispersed by gunfire into side streets. In one segment, protesters are seen carrying a woman who appears to be shot in the head and unconscious into a nearby home. 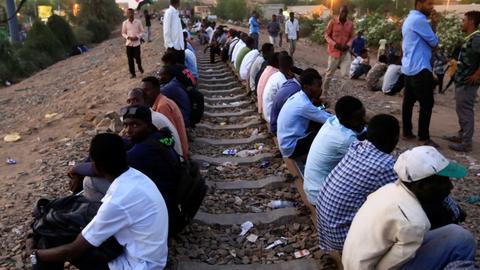