More than 8,000 people were displaced, dozens killed and many more are still missing following a coordinated attack on the town of Palma on March 24.

A boat carrying around 1,200 survivors of a deadly attack by Daesh-linked insurgents in northern Mozambique reached safety in the port of Pemba, some of them crying on arrival after spending days hiding in the bush.

Aid workers were at the crowded port on Friday to give food to those disembarking from the green and white ferry, while police and soldiers kept control of crowds of people excited to see relatives rescued during the attack that began last week in Palma, a Reuters reporter at the port said.

Many people were believed to have scattered into dense forest or to have attempted to escape by boat, aid workers said.

An emotional Mariamo Tagir, who arrived on the ferry, told Reuters TV that she had spent seven days in the bush, crying every day.

"I don't know where my son is. It's very painful," said Tagir. "The situation is really bad, many dead."

Insurgents have been increasingly active in the surrounding province of Cabo Delgado since 2017, although it is unclear whether they have a unified aim or what specifically they are fighting for.

They reportedly beheaded residents and ransacked buildings in a rampage that forced thousands to seek safety in surrounding forests, in the the biggest escalation of violence over the past three years.

The district where Palma is located is adjacent to natural gas projects worth $60 billion. It is home to around 110,000 people according to United Nations estimates, of whom more than 40,000 sought shelter there after fleeing attacks elsewhere.

A boat carrying more than 1,000 survivors of a deadly attack by Islamic State-linked insurgents in northern Mozambique arrived in the port of Pemba https://t.co/apr5tWrOio pic.twitter.com/dDJEzDPkg1

Mozambique's government has confirmed dozens of deaths in Palma, including at least seven killed when militants ambushed vehicles trying to escape the Amarula Hotel. One South African is confirmed to have died as a result.

British national Philip Mawer, who has been missing since the attack, was likely also killed in the incident, his employer RA International said in a statement on behalf of his family, adding a body matching his description had been recovered but not formally identified.

"The family is devastated by the loss," the statement said.

Military operations were ongoing on Wednesday, according to footage shot by local news station TVM, which showed soldiers carrying rocket-propelled grenades and guns in the area, as well as reinforcements arriving by helicopter.

"I can't right now say we have the whole village under control," army spokesman Chongo Vidigal said in the footage, adding however security forces did have a presence in the port area.

🚨 #Mozambique #CaboDelgado WFP is packing immediate food assistance to the most vulnerable, ready to support people affected by recent attacks in #Palma. 📦Each kit includes:

Reuters has not been able to independently verify the accounts from the town. Most means of communication were cut off after the attack began on March 24. Phone calls to Mozambique's government and security officials went unanswered on Thursday.

Aid groups believe the attack has displaced tens of thousands of people. Hundreds, including many foreign workers, have been evacuated by air.

As of Wednesday afternoon, a UN migration agency tracker showed more than 8,100 people had been displaced, almost half of them children. Roughly 20 percent had arrived in Pemba, with others turning up in the districts of Mueda, Montepuez and Nangade in Cabo Delgado.

However, the full scale of the casualties and displacement remains unclear.

There is "no sense of normalcy returning, unfortunately," the UN refugee agency's Juliana Ghazi told AFP in Johannesburg from Pemba on Thursday.

The ferry, organised by French energy major Total in coordination with the Mozambican government and the United Nations, docked at around 8 am local time (0600 GMT) in Pemba, the provincial capital of Cabo Delgado.

Total, which has a gas project on the Afungi Peninsula near Palma, said in a statement that there were almost 1,200 passengers on board, mainly women and children.

Total had already evacuated some staff and suspended construction work in late December following a series of jihadist attacks near its compound.

"We are currently in the special area in Afungi and never had a terrorism threat," he said.

A humanitarian official said the government was screening those arriving at Pemba to prevent infiltration by armed groups. 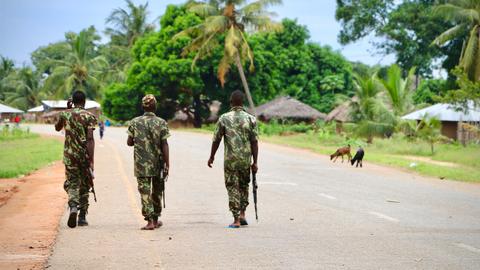 Who is the new militant group threatening Mozambique?