Thousands march across Sudan for civilian rule despite tight security

Thousands of Sudanese protesters have rallied two months on since a military coup, demanding soldiers "go back to the barracks" and calling for a transition to civilian rule.

Sudanese security forces fired tear gas to disperse protesters in Khartoum on Saturday as demonstrators took to the streets in the country's capital and elsewhere.

The marches started in different locations, from where the protesters meant to converge on the presidential palace.

Authorities had warned protesters against approaching “sovereign and strategic” sites in central Khartoum — a reference to main government buildings and key institutions.

Rallies were also underway in other cities, including Atbara, Port Sudan, Medani, Nyala and Elobied. There were no immediate reports of injuries.

Officers had earlier blocked bridges connecting the capital to suburbs, cut phone lines and restricted the internet ahead of the planned protests.

Last weekend, security forces violently dispersed demonstrators when they attempted to stage a sit-in near the presidential palace.

At least three protesters were killed, and more than 300 were wounded on Sunday.

There were also allegations of sexual violence, including rape and gang rape by security forces against female protesters, according to the United Nations.

At least 48 people have died in crackdowns during weeks of protests, according to the independent Doctors' Committee.

Volker Perthes, the UN special envoy for Sudan, urged security forces to “protect” the planned protests, and refrain from arresting people for simply wanting to take part in the demonstrations.

“Freedom of expression is a human right. This includes full access to the internet. No one should be arrested for his or her intention to protest peacefully,” he said in a Twitter post.

READ MORE: Five memorable protests that shook the system in 2021 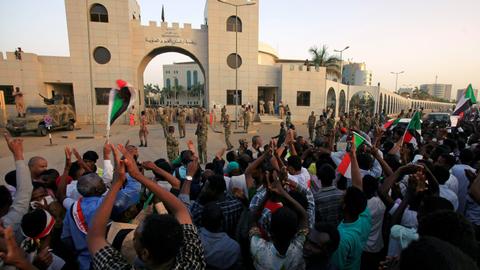