UN's Libya envoy Stephanie Williams says the government and Haftar's militia have agreed on issues that “directly impact the lives and welfare of the Libyan people,” noting that the thorny work to cement a ceasefire will continue.

UN's Libya envoy has said she is "quite optimistic" about the prospects of a ceasefire emerging from talks under way in Geneva between the two warring factions in the troubled north African country.

After two days of face-to-face discussions at the UN, which are scheduled to last until Saturday, the government and warlord Khalifa Haftar's militia have agreed to open internal land and air routes.

They also agreed to maintain the current calm on the front lines and to avoid military escalation, and on moves which should ensure the increase of oil production.

"The two sides have reached agreement on several important issues which directly impact the lives and welfare of the Libyan people," Stephanie Williams, the head of the UN Support Mission in Libya (UNSMIL), told a press conference on Wednesday.

“I urge the two parties negotiating here in Geneva to solve all outstanding issues and forge a lasting ceasefire agreement,” Williams added.

"I'm quite optimistic ... there is an air of seriousness and commitment," she said, she added.

Libya has been wracked by conflict since the overthrow of late Libyan leader Muammar Gaddafi in 2011.

Rival power centres, as well as a myriad of militias, are vying for control, while human rights violations are often overlooked.

The two main factions are based around the internationally recognised Government of National Accord in Tripoli and a parliament in the eastern city of Tobruk, which backs warlord Khalifa Haftar.

The eastern military warlord launched an offensive on Tripoli in April 2019.

Williams said that following last week's first flight in 18 months between Tripoli and Benghazi, a regular schedule of flights between the two main cities in the west and east would resume "towards the end of this week."

And she said the two sides "agreed to the opening of the land routes that connect all the regions and cities of Libya," including the coastal road from Misrata to Sirte.

They further agreed to support efforts towards the exchange of detainees, and on the need to end the use of inflammatory rhetoric.

Williams said there was a "real determination to preserve the country's unity and sovereignty."

"We are, in a sense, in a bit of a race against time here, because of the conditions in the country, and frankly because of the degree of flagrant foreign intervention and blatant violations of the arms embargo.

"These are Libyan solutions. It's their country and Libya is for Libyans. That is why I continue to be very optimistic that the parties here are going to reach a more lasting and permanent ceasefire."

The fourth round of the so-called Libyan 5+5 Joint Military Commission talks began on Monday.

The JMC is one of the three intra-Libyan tracks that UNSMIL is working on, along with economic and political lines of work. 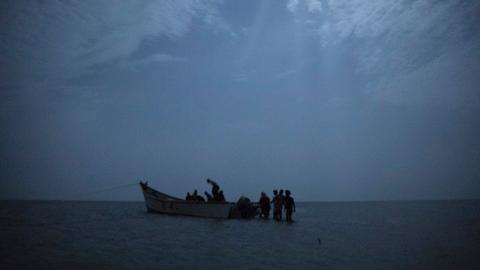