'US and Turkey coordinating in Libya conflict'

Libyan Deputy Defence Minister Salah Al Namroush said Turkey's strategic alliance with his country has helped in its organisation of military forces, as both sides in the war prepare to fight for the strategic city of Sirte

The US took action and helped Libya before foreign intervention in the country’s internal affairs became evident, the Libyan deputy defence minister has said as the government prepares to battle for oil-rich Sirte.

The US Africa Command and NATO helped confirm the presence of Russian fighter jets at al Jufra airbase, captured in 2017 by militias loyal to warlord Khalifa Haftar, Salah Al Namroush said in an interview on Tuesday. Turkey, he added, has been working in coordination with the US in Libya.

Underlining Turkey's global position, Namroush told Anadolu news agency, that Ankara has been a strategic ally of the Libyan government.

With Turkish military backing, Libya's Government of National Accord (GNA) has reversed a 14-month assault on the capital Tripoli by forces led by Haftar, who is supported by Russia, the United Arab Emirates and Egypt.

Turkey's involvement in Libya has strained ties with NATO ally France, which Ankara says has contributed to the chaos by backing Haftar.

Turkey sent military advisers to Libya to assist in the organisation of its military forces, Namroush said, adding that Fayez al Sarraj's administration is counting on Ankara to help with the establishment of a professional army.

Last November, Turkey and Libya signed landmark pacts on military cooperation, as well as boundaries in the Mediterranean.

Under the deal, Turkey has sent advisers to help the Libyan army defeat Haftar’s militias.

Namroush underlined that the Libyan army is pushing ahead with war preparations to liberate the city of Sirte from Haftar's militias.

“There is no red line for us. We aim to liberate all Libyan lands,” he said, referencing Egypt's warning.

Sisi said the city of Sirte and al Jufra airbase are a "red line" for Egypt, calling on his army to "be prepared to carry out any mission here within our borders, or if necessary outside our borders."

🇱🇾🇪🇬🇦🇪🇸🇦#Sisi and the military establishment have been under pressure from the #UAE to get directly involved in #Libya.

Many #Egyptians are already afraid that UAE is driving #Egypt into a quagmire in Libya the way it drove #Saudi Arabia into the #Yemen|i swamp. https://t.co/lSZTy3rh3o

The Arab League on Tuesday called for the withdrawal of foreign forces in Libya, urging for talks on ending the conflict.

The virtual meeting, held at Egypt's request, comes amid a flaring conflict in neighbouring Libya between a UN-recognised government in the country's west and eastern-based forces loyal to Haftar.

It was attended by representatives from 21 Arab countries including the GNA, which had opposed the meeting earlier this week.

The 14-clause resolution submitted by the Arab League provided for "rejecting all illegitimate foreign interventions" in Libya and called for "the withdrawal of all foreign forces on Libyan territories and its regional waters." 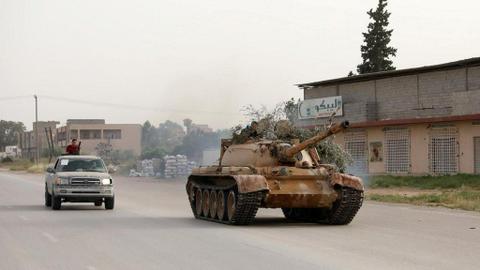