Twenty-seven members of the opposition Movement for Democratic Change (MDC) appeared in a Zimbabwe court facing public violence charges on Saturday after six people were killed in post-election protests that were met by a military crackdown.

Soldiers and tanks rolled into the capital Harare on Wednesday after protests erupted against President Emmerson Mnangagwa's ruling ZANU PF party's landslide win in the House of Assembly vote.

The army's clampdown on civilians and the opposition's allegations that the vote was rigged revealed the deep fissures in Zimbabwean society that developed during the four-decade rule of Robert Mugabe, when the security forces became a byword for heavy-handedness.

Three of the victims from Wednesday's clashes were buried on Saturday, the MDC said.

The 27 MDC members were arrested on Thursday at the party's headquarters.

Their lawyers said the MDC members were innocent and were delivering election results from provinces when arrested.

Prosecutors said the accused were positively identified by police and that witnesses would testify against them.

The MDC members were not formally charged by Harare Magistrate Francis Vhitorini and will be held in custody in prison until they return to court on Monday.

If found guilty, they face up to 10 years in jail.

Water cannon and more than a dozen anti-riot police were stationed outside the perimeter of the court house while others remained camped outside the MDC headquarters.

Mnangagwa on Friday urged Zimbabweans to unite after he was declared the first elected head of state since Mugabe's removal from power. MDC leader Nelson Chamisa insisted he had won and pledged to challenge the result.

On Saturday, Chamisa said he was aware of his supporters' anxieties and that he carried their hopes and aspirations.

"You voted but they cheated. Over 2.5 million votes can't be ignored. We're doing all to secure your vote (and) defend your WILL. Change is coming," he wrote on Twitter.

I’m aware of your anxieties, concerns and worries.Your hopes & aspirations I so dearly carry. We won but they declared the opposite. You voted but they cheated.Over 2.5 ml votes can’t be ignored.We’re doing all to secure your vote & defend your WILL. Change is coming!#Godisinit

The first post-Mugabe election had been cast as a watershed moment that would rid the former British colony of its global pariah status and begin a recovery in its failed economy.

But Mnangagwa's bid to repair the image of a nation known for repression and economic collapse was further hurt by a police raid on the MDC headquarters and the dispersal of journalists before Chamisa's news conference on Friday.

International election observers have cited several problems, including media bias and mistrust in the electoral commission.

On Saturday, the British government said it was deeply concerned by the post-election violence and the "disproportionate response from the security forces." 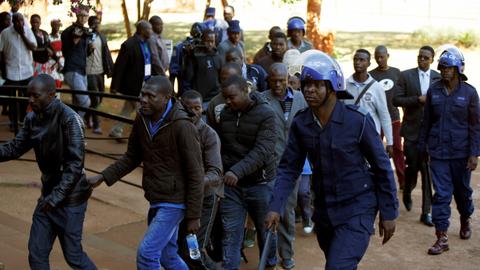