The 95-year-old is remembered both as a freedom fighter who fought British colonialism and built his country brick by brick and a despot who faced corruption charges and waged war in the former Zaire and turned a blind eye to human rights abuse.

Robert Gabriel Mugabe, who ruled Zimbabwe for 37 years, has died. He was 95 years old.

His death was announced on Twitter by Zimbabwe President Emmerson Mnangagwa with the “utmost sadness” on Friday.

Mnangagwa called Mugabe “an icon of liberation, a pan-Africanist who dedicated his life to the emancipation and empowerment of his people”.

Mnangagwa’s sentiments were not shared by all, however, as some called the late ruler a ruthless killer, responsible for the deaths of thousands during the Gukurahundi massacres in the 1980s, and an inefficient ruler who “took a thriving economy and turned it into Africa’s Venezuela".

Be sincere. You of all people know about #Gukurahundi.
Mugabe was a ruthless mass murderer who ruled for as long as he did because of his killer instinct. He dedicated his life not to emancipation but to his quest for a one party state whose benefits you are reaping. Respect us.

Took a thriving economy and turned it into Africa’s Venezuela. Way to go Robert!

Why was Mugabe important?

Robert Mugabe became the Prime Minister of Zimbabwe in 1980, following a 15-year guerilla war in the country. In 1965, the white-minority government declared independence from the United Kingdom as Rhodesia. After the Lancaster House Agreement was signed in 1979, Rhodesia became the Republic of Zimbabwe and a ceasefire was declared, ending the Rhodesian Bush War.

Mugabe was also leader and first secretary of The Zimbabwe African National Union – Patriotic Front (ZANU-PF) party for decades, a party which he had co-founded in 1987, only to be ousted by Emmerson Mnangagwa in 2017 after what can pretty much be called a coup.

Some Twitter users called Mnangagwa a hypocrite for mourning the loss of Mugabe on social media.

Hypocrite!
Dodn't you mean you precipitated his death?

Mugabe has had a stranglehold on Zimbabwean politics for nearly 40 years. Even after he was ousted from politics against his will, his influence kept going.

Cyril Zenda, writing for TRT World, notes: "Mugabe’s departure is likely to signal the dwindling of a lucrative business that many people have benefited from. Mugabe’s existence had been at the centre of high-level fundraising for groups aligned and opposed to Africa’s longest serving president.”

Zenda adds: “But now that Mugabe is no longer the president of Zimbabwe, both sides of this business now find themselves with no cause. No Mugabe to raise money for or against.”

In another article for TRT World, Zenda writes about Mugabe’s missteps. For example, there was the costly five-year war in the former Zaire, which he wouldn’t justify nor apologise for.

There was the “genocidal operation” code-name Gukurahundi that resulted in an estimated 20,000 people who were killed or ‘disappeared’ without trace in the early 1980s “when Mugabe unleashed his North Korean-trained personal army unit on villagers in the opposition-controlled southwestern parts” of Zimbabwe.

Zenda also writes about the clashes between ZANLA and ZIPRA forces, the armed wings of ZANU-PF and opposition ZAPU parties respectively, that resulted in several hundred deaths.

While Mugabe established two commissions of enquiry into the killings due to international pressure, their findings were never released to the public despite much demand.

Following the 2008 economic crisis, the Reserve Bank of Zimbabwe had incurred a $1.4 billion hole, yet the list of individuals who had looted the funds were never made public, despite being made available to Mugabe.

Zenda also notes that diamond looting in Zimbabwe led to losses of billions of dollars while gross human rights violations led to the death of hundreds. Mugabe was silent on this front as well.

Zenda says Emmerson Mnangagwe “appears determined to safeguard Mugabe’s secrets” while at the same time willing “to continue with the same culture of secrecy". With Mugabe now dead, there may be renewed hope that his secrets may emerge, but this is far from a certainty. 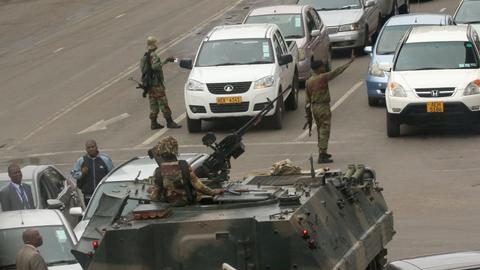