1
Lab monkeys escape after road crash in US
2
Proud Boys leader decries 'violence' after gets out of US jail
3
US embassy staff families evacuate Ukraine
4
Biden approval rating falls to new low at one year mark
5
Total, Chevron withdraw from Myanmar over human rights abuses

Investors are anticipating a policy package that will make an effort to halt a sharp slide in the value of the peso, which has plunged to a record low.

Investors were looking for signs on Friday that Argentina would unveil a fiscal package austere enough to halt this month's more than 30 percent dive in the local peso currency brought on by jitters over the government's ability to pay its debt next year.

A policy package marked by further government spending cuts is expected to be announced on Monday. But any further belt tightening will meet with strong opposition, as discontent with President Mauricio Macri grows over high inflation, a sputtering economy and subsidy cuts that have jacked up household heating and water bills.

"If the government fails to deliver a convincing austerity package, the peso will probably slide further and another large interest rate hike would be likely," said an early Friday note from consultancy Capital Economics.

The peso lost 20 percent of its value against the US dollar over two days after Macri announced on Wednesday he had asked the International Monetary Fund to advance disbursements under a $50 billion financing deal, which raised alarms in markets about whether Argentina could fund its 2019 deficit.

Speaking to reporters on Thursday night, Treasury Minister Nicolas Dujovne said the government would announce a set of new economic measures on Monday, and would target a 2019 primary fiscal deficit below the 1.3 percent of gross domestic product agreed with the IMF.

Earlier that day the currency closed at a record low 39.25 pesos per dollar.

The government needs to do whatever it takes to bring fiscal accounts back in order, said Bertrand Delgado, emerging markets strategist at Societe Generale in New York. "That's the way to bring back confidence to the markets," he said.

Macri's administration is expected to send its proposed 2019 budget to Congress next month. Austerity measures have been unpopular with many Argentinians, who blame budget cuts imposed by the IMF for exacerbating the effects of a 2001-02 economic crisis that plunged millions into poverty.

Tens of thousands of people marched through downtown Buenos Aires on Thursday evening demanding higher budgets for public universities and higher salaries for university professors and staff. Protesters say salaries have been eroded by inflation that clocked in at an annual rate of 31.2 percent in July.

"In the context of the debate over the IMF's adjustment budget, we need to organise to change the economic path," said Vinesa Siley, a lawmaker in Argentina's lower house of Congress aligned with former populist President Cristina Fernandez. 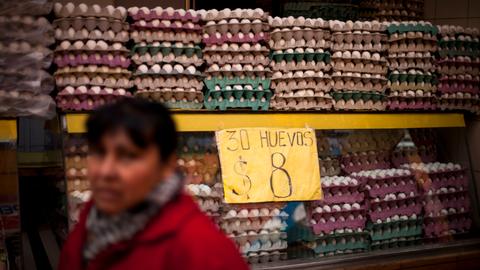 Peso volatility could be a deciding factor in Argentina’s election

1
Lab monkeys escape after road crash in US
2
Proud Boys leader decries 'violence' after gets out of US jail
3
US embassy staff families evacuate Ukraine
4
Biden approval rating falls to new low at one year mark
5
Total, Chevron withdraw from Myanmar over human rights abuses