The announcement comes after the number of people killed in clashes with security forces at a fuel plant near La Paz on Tuesday rose to eight.

Bolivia's interim President Jeanine Anez asked Congress Wednesday to approve a law that would allow for new elections, after deadly unrest following the resignation of Evo Morales and the disputed October 20 ballot.

The announcement comes after the number of people killed in clashes with security forces at a fuel plant near La Paz on Tuesday rose to eight, officials said, taking the total death toll since last month's vote to 32.

Morales, who fled to Mexico after resigning November 10, accused the Bolivian security forces of engaging in "genocide" against his indigenous supporters and called for action by the international community.

The government earlier released an audio recording of a person who is alleged to be Morales ordering a member of the opposition movement to continue road blockades around the landlocked country.

For weeks his supporters have been obstructing main roads leading from agricultural regions to La Paz and other major cities, causing severe food and fuel shortages.

Speaking to reporters, Anez said she hoped the caretaker government's proposal — which also seeks the annulment of the original ballot and the formation of a new election tribunal — would form the basis for generating "a national consensus."

Justice Minister Alvaro Coimbra said the hope was for Congress to approve the law "as soon as possible," to allow the selection within 15 days of a new election tribunal, which would be responsible for choosing a date for the ballot.

A similar proposal put forward by Morales' Movement for Socialism (MAS) party has been sent to a Senate commission for analysis.

Anez still has the option to issue a presidential decree for a new vote.

The Washington-based Organization of American States, which audited last month's elections and found irregularities, on Wednesday approved a resolution calling on Bolivia to "urgently" hold a new vote.

Unrest in Bolivia first erupted after Morales — the country's first indigenous president — was accused of rigging the results of last month's polls to gain re-election.

He resigned and fled to Mexico after losing the support of the security forces.

Anez, the 52-year-old former deputy speaker of the Senate, declared herself the country's interim president last week, filling a vacuum left by Morales' departure and the resignations of several ministers.

Since Morales stepped down, his supporters have demonstrated daily in the streets of La Paz and in some provincial cities to demand Anez's departure.

The United Nations, the European Union and the influential Catholic Church have been trying to broker talks between Anez's interim government and opposition parties loyal to Morales to end the violence. 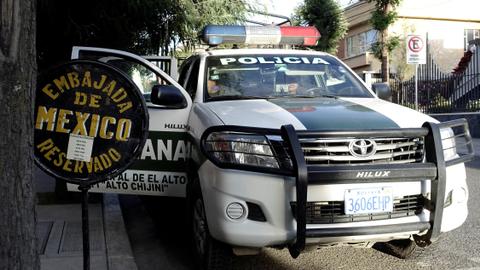