Donald Trump is pardoning soldiers who have committed war crimes in a test for US justice.

US Navy chief, Richard Spencer, has been fired from his job after clashing with President Donald Trump over his attempts to pardon Navy Seal Edward Gallagher, who was accused of war crimes.

Spencer, in a scathing statement, said that it had become evident that he and the president differ on the meaning of "good order and discipline" in the military.

Trump, for his part, went to Twitter as he often does to go after staff he has fired noting, “I was not pleased with the way that Navy Seal Eddie Gallagher's trial was handled by the Navy. He was treated very badly but, despite this, was completely exonerated on all major charges. I then restored Eddie’s rank.”

I was not pleased with the way that Navy Seal Eddie Gallagher’s trial was handled by the Navy. He was treated very badly but, despite this, was completely exonerated on all major charges. I then restored Eddie’s rank. Likewise, large cost overruns from past administration’s.....

Gallagher had several charges levelled against him, including stabbing an unarmed 17-year-old prisoner who was allegedly affiliated with Daesh and of randomly shooting at civilians while on a tour of Iraq in 2017.

While he was cleared of those charges, he was convicted for posing with a corpse.

Earlier this month, Trump also pardoned Clint Lorance, a former US Army officer who was sentenced to 19 years in prison for the murder of two Afghan civilians.

Trump then also went on to pardon Major Mathew Golsteyn, a US Army Special Forces officer facing murder charges for the murder of another unarmed Afghan civilian.

In honor of his past service to our Country, Navy Seal #EddieGallagher will soon be moved to less restrictive confinement while he awaits his day in court. Process should move quickly! @foxandfriends @RepRalphNorman

In May of this year, Trump pardoned former US Army lieutenant Michael Behenna for the murder of an unarmed Iraqi man after he was marched into the desert and stripped naked.

When the US president called him to tell him personally about his pardon, Behenna, the first convicted US war criminal said, “I had tears in my eyes, my heart’s beating fast and I’m smiling from ear to ear.”

The American Civil Liberties Union National Security Project Director Hina Shamsi in a statement said, "This pardon is a presidential endorsement of a murder that violated the military's own code of justice."

These episodes highlight the US military’s capacity to punish soldiers for crimes without a US president deciding that he is the judge, jury and pardoner-in-chief.

Earlier this year, the International Criminal Court’s (ICC) chief prosecutor, Fatou Bensouda, asked for the US to be investigated by the court. The Trump administration lashed out by revoking her visa to the US and threatening the court with unspecified actions.

The ICC ultimately buckled under US pressure and in an unusual judgment argued that while the court did have jurisdiction over the case, it could not investigate the issue due to “practical” reasons.

Activists at the time decried the decision as “insane and politically charged.”

Donald Trump, in the past, has argued for waterboarding and the killing of terrorist families in the US War on Terror.

While many have condemned Trump's words, Trump is not the first president to pardon war criminals. George W Bush allowed extraordinary rendition and torture of prisoners, which was widely condemned at the time.

Trump’s pardoning of US soldiers indicates that he will continue to set new norms about what is acceptable behaviour for a sitting president. 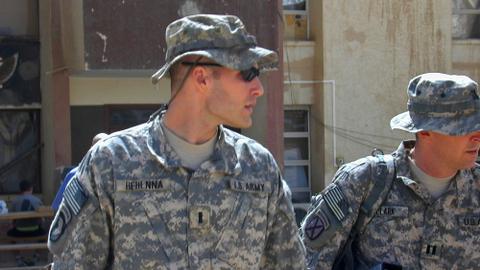