Hundreds erupted in celebration on the streets of San Juan on Friday when the clock struck 5 pm [local time] –– the moment the island's embattled governor, Ricardo Rossello, said he'd officially step down following a political scandal that incensed his opponents.

Rossello's office on Friday said attorney Pedro Pierluisi was sworn in as the US territory's next governor, a move the island's Senate leader quickly blasted as ''illegal.''

Rossello agreed to leave office last month after hundreds of thousands of Puerto Ricans took to the streets demanding his resignation and condemning leaked, profane messages by Rossello and other officials.

Rossello had earlier picked Pierluisi to be secretary of state, which also put him next in line to lead the island after interim-Justice Secretary Wanda Vazquez said she didn't want to be governor.

Pierluisi was confirmed on Friday by the island's House of Representatives, but Puerto Rico's Senate pushed off their vote until next week.

Pierluisi also has many opponents who question his former role in overseeing the island's bankruptcy and his ability to lead Puerto Rico.

Earlier, in an emailed announcement from his office, Rossello said Pierluisi does not need confirmation from both houses of the territory's legislature because he was named secretary of state, the next in line to be governor, in a recess appointment this week.

His resignation came in response to weeks of popular protest over mismanagement and a series of leaked chats in which he and advisers denigrated a range of Puerto Ricans.

The down-to-the-wire maneuvering risked political chaos and a constitutional crisis and sowed bitterness and pessimism among Puerto Ricans about the fate of their island, which has been battered by years of bankruptcy and Hurricane Maria in 2017, one of the worst natural disasters in US history.

We speak with Florida-based journalist Steve Malave about the latest in Puerto Rico.

Only days ago, there was jubilation over the success of the popular movement to force Rossello out of office. On Friday, Puerto Ricans bemoaned the chaos that left them not knowing who would be their next governor.

"People are disgusted with the government in general, not just Ricardo Rossello, everyone," said Janeline Avila, 24, who recently received her degree in biotechnology.

Hundreds of protesters marched to the governor's residence, the Fortaleza, banging pots and drums and singing the national anthem. The demonstrators chanted "Ricky, get out! You didn't quit, the people fired you!"

"It's obvious that the constitutional setup that we have isn't working for the people," he said. "None of the options is one the people chose, or want, or deserve."

Puerto Rico's House of Representatives voted 26-21, with one abstention to confirm Pierluisi as secretary of state. The legislature, which is controlled by Pierluisi's New Progressive Party, erupted into cheers when the deciding vote was cast.

Some lawmakers and officials believe that because the legislature was not in session when Pierluisi was appointed, he was already secretary of state. Others argue that he still needs to be confirmed by the House or both the House and Senate.

Lawmakers and Pierluisi himself expressed concern that the continuing political uncertainty would damage Puerto Rico's efforts to get federal funds to recover from the hurricane and confront the economic crisis.

Several legislators have accused Pierluisi of a conflict of interest because he worked for a law firm that represents a federal control board overseeing the island's finances, a body that has repeatedly clashed with local officials over demands for austerity measures.

Pierluisi, whose brother-in-law is the board's chairman, tried to dispel those concerns in his opening remarks.

The board was created by Congress to oversee the restructuring of more than $70 billion in public debt after Puerto Rico declared a form of bankruptcy.

Pierluisi told lawmakers he is against several austerity measures demanded by the board, including laying off public employees and eliminating a Christmas bonus.

He said he supports public-private partnerships and the privatisation of the island's public power company.

"The people want a change, and I don't blame them," he said. 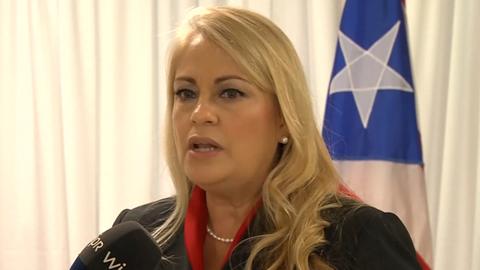