The Senate's Republican leaders insist Neil Gorsuch will be confirmed on the Senate floor on Friday regardless of what the Democrats do.

The Senate Judiciary Committee voted 11-9 along party lines to send Gorsuch's nomination to the full Senate. This has set up a political showdown this week between Trump's fellow Republicans and the opposition Democrats that is likely to trigger a change in long-standing Senate rules to allow his confirmation.

Democrats have amassed 42 senators in support of a procedural hurdle called a filibuster. This requires a super-majority of 60 votes in the 100-seat Senate in which the Republicans hold a 52-48 majority to allow a confirmation vote.

Even before the panel voted, committee member Christopher Coons put the Democrats over the threshold as the 41st senator backing the filibuster bid.

In the face of the filibuster, Senate Majority Leader Mitch McConnell would be expected to force a confirmation vote by having the Senate change its rules and allow for a simple majority vote for confirmation of Supreme Court justices, a move sometimes called the "nuclear option" that Trump favours.

Senate Democratic leader Chuck Schumer, leading the filibuster effort, said McConnell should have the "vision and courage to see past this impasse" and not "go nuclear," suggesting that Trump replace Gorsuch with a new consensus nominee chosen after meeting with Democrats.

Senate confirmation of Gorsuch, 49, would restore the nine-seat high court's conservative majority, fulfilling one of Trump's top promises during the 2016 presidential campaign.

On the Senate floor, McConnell called the Democratic strategy "a new low," saying there was no principled reason to oppose a judge as well qualified and widely respected as Gorsuch.

He did not explicitly say he would use the "nuclear option," but several Republicans said that would happen. White House spokesman Sean Spicer said the decision would be McConnell's. Republican Senator John McCain, a long-time opponent of Senate rules changes, told reporters he would support the move.

Judiciary Committee Republicans blasted Democrats for pursuing what they called the first "partisan filibuster" of a Supreme Court nominee - there was a successful bipartisan filibuster five decades ago against a Democratic president's nominee - and said it would come to naught because of the threatened rule change.

But it was Senate Republicans who last year refused to even consider Democratic former President Barack Obama's nomination of appellate judge Merrick Garland to fill the same high court vacancy that Trump has selected Gorsuch to fill.

Democrats have accused Gorsuch of being insufficiently independent of Trump, evading questions on key Supreme Court rulings of the past including on abortion and political spending, and favouring corporate interests over ordinary Americans.

Republicans control the White House and Congress for the first time in a decade. The inability of Senate Republicans to coax enough Democratic support to avoid the "nuclear option" reflected the intense partisan divide in Washington and the Trump administration's failure to win the cooperation of the opposition party.

Spicer accused Democrats of partisan obstruction that sets "a very dangerous precedent" and told a briefing that "we're obviously disappointed that the overwhelming majority of them are still playing politics with the nation's highest court."

The actual confirmation vote would be by a simple majority if the filibuster is stopped.

With the failure of Republican healthcare legislation in Congress and with courts blocking the president's ban on people from several Muslim-majority nations from entering the United States, winning confirmation for Gorsuch has taken on even more importance for Trump.

The 60-vote super-majority threshold that gives the minority party power to hold up the majority party has over the decades forced the Senate to try to achieve bipartisanship in legislation and presidential appointments.

Republican committee member Lindsey Graham said, "If we have to, we will change the rules, and it looks like we're going to have to. I hate that. I really, really do."

While Gorsuch's opponents would fight a Senate rule change, it was the Democrats who in 2013 changed the Senate rules to limit filibusters after Republicans used the procedure against Obama's appeals court nominees.

The Senate, then led by Democrats, barred filibusters for executive branch nominees and federal judges aside from Supreme Court justices. Even if Republicans do change the rules, legislation, as opposed to appointments, would still need to meet a 60-vote threshold. 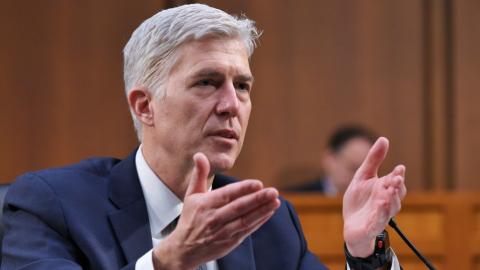 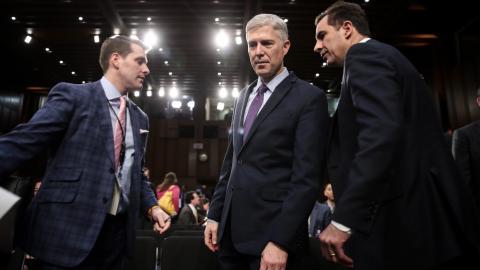