Sanders is one of Trump's closest and most trusted White House aides and one of the few remaining on staff who worked on his campaign. But under Sanders' tenure, regular White House press briefings became a relic of the past.

President Donald Trump on Thursday made the surprise announcement of the departure of spokeswoman Sarah Sanders, who has been widely criticised for her performance in the White House.

"After 3 1/2 years, our wonderful Sarah Huckabee Sanders will be leaving the White House at the end of the month and going home to the Great State of Arkansas," Trump tweeted, adding that he hoped she would run for governor of her state.

....She is a very special person with extraordinary talents, who has done an incredible job! I hope she decides to run for Governor of Arkansas - she would be fantastic. Sarah, thank you for a job well done!

Sanders has been one of Trump's most loyal foot soldiers, almost constantly at his side during his tumultuous two and a half years at the White House and during the campaign before.

At a White House event on reintegration into society for ex-prisoners, Trump interrupted proceedings to summon the "warrior" Sanders from the audience and lavish praise on her record.

In fact, Sanders has a combative, sometimes bitter relationship with the White House press corps and is seen as responsible for the demise of the formal daily briefing – practically an institution under previous presidents.

The last time she took to the podium for a back-and-forth with reporters in the White House briefing room was March 11. Instead, she communicates largely through interviews on the president's favourite TV network Fox News and short, informal briefings with other journalists outdoors.

She has also been accused of telling lies to reporters, although she denies this.

Despite Sanders' damaged reputation in media circles, there'd been no hint from the administration that her exit was imminent.

Called up to the microphone by Trump at the ex-prisoners' event, Sanders said she would "try not to get emotional, because I know crying can make us look weak."

In a brief address, the spokeswoman praised Trump and her colleagues at the White House, saying she "loved every minute" of the job.

"I'm going to continue to be one of the most outspoken and loyal supporters of the president and his agenda and I know he's going to have an incredible six more years and get a lot more done," she said.

She made no mention of the media or the role of journalists at the White House. 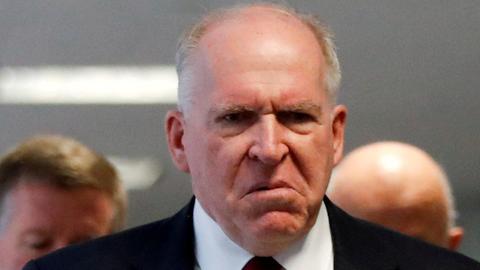