The White House said the measure would help free up jobs for Americans in an economy reeling from the Covid-19 crisis. But it has drawn strong criticism from major business groups, trade bodies, politicians, scientists and others.

US President Donald Trump has signed an executive order suspending the entry of certain foreign workers until the end of 2020, a move that is drawing flak not only from the business groups but also from scientists, politicians and others.

The ban on new visas applies to H-1B visas, widely used by technology companies, H-2B visas for seasonal workers, J-1 visas for cultural exchanges and L-1 visas for managers and key employees of multinationals. It also impacts families of immigrants via a freeze on green cards.

The White House said the decision would help create jobs for Americans who have been affected by the Covid-19 crisis. The order itself leaves a small Covid-19 shaped loophole as well as one for foreign nannies.

But critics say Trump is using the pandemic to accomplish his longstanding goal to limit immigration into the US. Even his supporters have come out against his decision.

A look at reactions from big companies and stakeholders:

US Chamber of Commerce CEO Thomas J Donohue described the Trump administration's move as "a severe and sweeping attempt to restrict legal immigration."

"Putting up a ‘not welcome’ sign for engineers, executives, IT experts, doctors, nurses and other workers won’t help our country, it will hold us back," he said in a statement.

He said restrictive changes to the US immigration system "will push investment and economic activity abroad, slow growth, and reduce job creation."

“A severe and sweeping attempt to restrict legal immigration” — one that will “push investment and economic activity abroad, slow growth, and reduce job creation.“

Google CEO Sundar Pichai – whose company has been a leading beneficiary of the H1-B visa system – said he was "disappointed" by the announcement.

He said Google will continue to stand with immigrants and work to expand opportunity for all.

"Disappointed by today’s proclamation - we’ll continue to stand with immigrants and work to expand opportunity for all," Pichai tweeted.

Immigration has contributed immensely to America’s economic success, making it a global leader in tech, and also Google the company it is today. Disappointed by today’s proclamation - we’ll continue to stand with immigrants and work to expand opportunity for all.

'Not the time to cut off from talent'

Microsoft President Brad Smith in his tweet said "now is not the time to cut our nation off from the world’s talent or create uncertainty and anxiety."

"Immigrants play a vital role at our company and support our country’s critical infrastructure," he added.

Now is not the time to cut our nation off from the world’s talent or create uncertainty and anxiety. Immigrants play a vital role at our company and support our country’s critical infrastructure. They are contributing to this country at a time when we need them most.

Too broad a ban for Musk

Tesla and SpaceX CEO Elon Musk said he "very much" disagreed with the move.

"Very much disagree with this action. In my experience, these skillsets are net job creators. Visa reform makes sense, but this is too broad," he tweeted

Very much disagree with this action. In my experience, these skillsets are net job creators. Visa reform makes sense, but this is too broad.

Amazon slammed the Trump administration's measure as a "short-sighted action."

“We oppose the Administration’s short-sighted action. Preventing high skilled professionals from entering the country and contributing to America’s economic recovery puts American’s global competitiveness at risk," a spokesman said in a statement shared with GeekWire.

"The value of high-skilled visa programs is clear, and we are grateful for the many Amazon employees from around the world that have come to the US to innovate new products and services for our customers."

Science and innovation 'to suffer'

Those associated with the field of scientific research have expressed fear that banning experts from abroad will prove detrimental to innovation.

This is the worst thing that’s happened to US science and innovation. Banning #Immigrant scientists will lead to a devastating loss in creativity and productivity. Pretty much every lab in the US will suffer. https://t.co/xzZypmAgVn

South Carolina Senator Lindsey Graham, normally a firm Trump supporter, criticised the decision and tweeted: "Those who believe legal immigration, particularly work visas, are harmful to the American worker do not understand the American economy."

He added that he feared the president's decision "will have a chilling effect on our economic recovery at a time we should be doing all we can to restore the economy."

This decision, in my view, will have a chilling effect on our economic recovery at a time we should be doing all we can to restore the economy.

Shivendra Singh, Vice President and Head, Global Trade Development, NASSCOM, said, "while there is need for the healthcare sector, those who are essential tech should also be considered,”

These tech workers are part of critical projects such as powering the critical infrastructure needed in the hospitals during a crisis, involved in the research to find a cure for the virus and the remote infrastructure that is now needed for online education, Singh said.

#NonImmigrants are delivering critical #EssentialServices in the #US. Without their continued contributions, US #EconomicRecovery & #IndustryGrowth would be slower and timeline for treatment & cure of #COVID19 would lengthen. @NASSCOM @shivendra_1969 @debjani_ghosh_ https://t.co/3iJwvUkvGD

BSA, a group that represents major software companies, urged the administration to reconsider, particularly changes to the H-1B program, saying they will hinder economic recovery by making it harder to fill critical positions.

“Filling these roles that are more abundant than the number of US employees qualified to fill them means these jobs can be kept in the US," the group said.

"This allows companies based in the US to remain globally competitive, which in turn boosts the US economy, creating jobs for millions of Americans."

Exemptions will apply to seafood processing plants and to au pairs, who offer families household help like childcare. 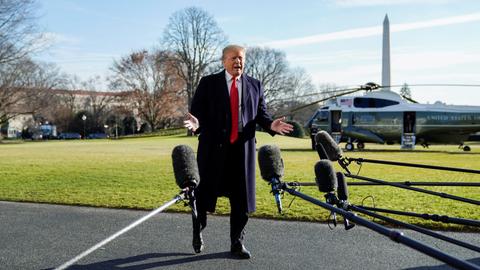