President Donald Trump says the US would impose tariffs of 25 percent on steel imports and 10 percent on imported aluminium next week, as global leaders mulled taking punitive measures.

Ordering combative action on foreign trade, President Donald Trump declared on Thursday the US would impose steep tariffs on steel and aluminium imports, escalating tensions with China and other trading partners and raising the prospect of higher prices for American consumers and companies.

Trump said the duties of 25 percent on steel and 10 percent on aluminium would be formally announced next week although White House officials later said some details still needed to be ironed out.

"We’re going to build our steel industry back and our aluminium industry back," he said, adding firm action was crucial to protect US industry from unfair competition and to bolster national security.

The tariffs, he said, would remain for "a long period of time," but it was not immediately clear if certain trading partners would be exempt.

His announcement came only after an intense internal White House debate what one person with direct knowledge of the discussions described as a night of "chaos" in the White House due to frequent switching of positions in the administration.

Our Steel and Aluminum industries (and many others) have been decimated by decades of unfair trade and bad policy with countries from around the world. We must not let our country, companies and workers be taken advantage of any longer. We want free, fair and SMART TRADE!

"What's been allowed to go on for decades is disgraceful. It's disgraceful," Trump told the executives in the Cabinet Room. "When it comes to a time when our country can't make aluminium and steel ... you almost don't have much of a country."

Increased foreign production, especially by China, has driven down prices and hurt US producers, creating a situation the Commerce Department has called a national security threat.

However, critics raised the spectre of a trade war, suggesting other countries would retaliate or use national security as a reason to impose trade penalties of their own.

China has already threatened to curb imports of US soybeans, while the EU has said it will consider action as well.

"We underscored the importance of achieving balance and reciprocity in the economic relationship," the official said of the meeting between Liu He and Treasury Secretary Steven Mnuchin, White House economic adviser Gary Cohn, and US Trade Representative Robert Lighthizer. "We discussed ways to ensure fair and reciprocal trade."

The move will not directly hit China that hard, with data showing that Canada supplies 16 percent of US demand versus China's two percent and is by far the largest steel exporter followed by Brazil and South Korea.

"Should restrictions be imposed on Canadian steel and aluminium products, Canada will take responsive measures to defend its trade interests and workers," Foreign Affairs Minister Chrystia Freeland said in a sharply worded statement.

Statement by Canada on steel and aluminum: https://t.co/5Y4nYKKRsP

Brazil's industry ministry said it would consider taking action on its own over the tariffs or in concert with other countries. Two of its largest steelmakers, Cia Siderurgica Nacional and Usiminas sold off on the tariff news, closing down 4.4 percent and 4.2 percent, respectively.

Washington is already engaged in a dispute with Canada and Mexico over its proposed revision to the North American Free Trade Agreement and months of tense talks have failed to produce any meaningful progress.

Overseas, Trump's words brought a stinging rebuke from the president of the European Commission.

Though the president generally focuses on China in his trade complaining, it was the EU's Jean-Claude Juncker who denounced his plan as "a blatant intervention to protect US domestic industry."

Juncker said the EU would take retaliatory action if Trump followed through.

Asked whether there would be exemptions for any countries, White House spokeswoman Sarah Sanders said she would not get into any details ahead of next week’s announcement. She said the tariffs were still being finalised.

News of the tariffs drove the stocks of US domestic steel and aluminium makers sharply higher, but also hit sentiment on Wall Street due to the potential impact of higher costs on consumers.

The threat of tariffs was sharply criticised by some senior Republican legislators as well as industries from autos to oil whose input costs will rise. A major concern is that US farm exports could be hit hard in retaliation by steel-exporting countries.

After Trump's statement, AK Steel Holding was up almost 10 percent, US Steel Corp was up over five percent and Nucor rose 3.2 percent. By contrast shares of steel consumers fell with Ford Motor Co down over three percent and General Motors Co down almost four percent.

Trump believes the tariffs will safeguard American jobs but many economists say the impact of price increases for consumers of steel and aluminium, such as the auto and oil industries, will be to destroy more jobs than they create.

"This is going to have fallout on our downstream suppliers, particularly in the automotive, machinery and aircraft sectors," said Wendy Cutler, a former US trade official who is now vice president of the Asia Society Policy Institute. "What benefits one industry can hurt another. What saves one job can jeopardise another."

Debate within the White House

The decision had been strenuously debated within the White House, with top officials such as economic adviser Gary Cohn and Defense Secretary Jim Mattis raising concerns.

Mattis, in a memo to Commerce, said US military requirements for steel and aluminium represent about three percent of US production and that the department was "concerned about the negative impact on our key allies" of any tariffs. He added that targeted tariffs would be preferable to global quotas or tariffs.

Plans for Trump to make an announcement were thrown into doubt for a time because of the internal divisions. The actual event caught some top White House officials off guard and left aides scrambling for details. Key Senate offices also did not receive advance notice.

White House press secretary Sarah Huckabee Sanders said the decision "shouldn't come as a surprise to anyone," noting that the president had been talking about it "for decades."

But some Republicans in Congress were plainly upset.

"The president is proposing a massive tax increase on American families. Protectionism is weak, not strong," said Senator Ben Sasse of Nebraska. "You'd expect a policy this bad from a leftist administration, not a supposedly Republican one."

GOP Senator Pat Roberts of Kansas, chairman of the Senate Agriculture Committee, said "every time you do this, you get a retaliation and agriculture is the No 1 target."

Trump met with more than a dozen executives, including representatives from US Steel Corp, Arcelor Mittal, Nucor, JW Aluminum and Century Aluminum. The industry leaders urged Trump to act, saying they had been unfairly hurt by a glut of imports.

"We are not protectionist. We want a level playing field," said Dave Burritt, president and chief executive officer at US Steel.

Trump last year ordered an investigation into whether aluminium and steel imports posed a threat to national defence.

Ross said last month that the imports "threaten to impair our national security," noting, for example, that only one US company now produces a high-quality aluminium alloy needed for military aircraft.

Under section 232 of the Trade Expansion Act of 1962, the president has the authority to restrict imports and impose unlimited tariffs if a Commerce Department investigation finds a national security threat.

Commerce recommended a number of options. The president's plan is more stringent than any of them.

It was the latest move by the president to engage in trade actions after campaigning to revitalise the "forgotten" workers of the country.

Trump earlier raised duties on Chinese-made washing machines, solar modules and some aluminium and steel products to offset what he said were improper subsidies. 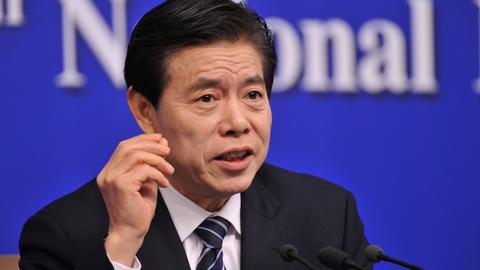 China minister says trade war with US would be 'disaster'