Honduras faced a growing election crisis on Wednesday, with its US-friendly president edging ahead in troubled vote count that his centrist rival, a television game show host allied with leftists, has rejected, saying he is being robbed.

Three days after polling stations closed in Honduras' presidential election, there was growing international concern with no clear winner and both men claiming victory, despite nearly a fifth of ballots remaining uncounted.

Stricken with poverty, drug gangs and one of the world's highest murder rates, Honduras is one of the United States' closet military and ideological allies in Central America. On Wednesday, the U.S. State Department urged a quick conclusion to the vote count, which has been widely criticized.

Resolution to the festering crisis had appeared possible on Wednesday when both candidates vowed to respect the final result once disputed votes had been scrutinized, issuing identical signed statements brokered by the Organization of American States (OAS).

But the accord did not last long.

Centrist opposition candidate Salvador Nasralla - who had watched with disbelief as his original 5-point lead evaporated, allowing center-right President Juan Orlando Hernandez to edge ahead by 3,000 votes - told reporters that he rejected the document he had signed just a few hours before.

Nasralla cited an hours-long technical glitch at the election tribunal, and fears that Hernandez was planning to unilaterally declare himself victorious, as his reasons for dismissing the results of the electoral body.

"They take us for idiots and want to steal our victory," said Nasralla, who heads a coalition of leftist and centrist parties. "The document I signed today with the OAS has no validity," he added, calling it a "trap" and pledging to take to the streets to defend his votes.

The OAS said in a tweet that it regretted Nasralla had withdrawn from the pact, and that it would continue working for "justice" in the Honduran elections.

With around 82.89 percent of ballots counted, the center-right Hernandez had 42.2 percent of the vote, while Nasralla was on 42.1 percent, the election tribunal said. Hernandez's National Party appears set to retain control of Congress.

As he caught his rival, Hernandez's blue-clad supporters celebrated, chanting the president's name at a party base in capital Tegucigalpa, TV images showed, while thousands of Nasralla supporters took to the streets in protest.

The election body published more than half of the results of Sunday's election early on Monday, but faced international criticism for an ensuing 36-hour delay in releasing further data. The count halted again late on Wednesday afternoon.

Tribunal chief David Matamoros apologized to the nation for a fresh computer glitch that derailed operations.

"We've had a problem that we regret and that we didn't expect to have, and that we're resolving as quickly as possible," he said. "Sometimes in an election, you can have a system failure, but never in a moment as critical as this."

International observers said the delays were damaging the credibility of authorities and threatened to undermine the legitimacy of the next president.

"We urge all candidates to respect the results," she said.

Behind closed doors, the parties of Hernandez, the pre-vote favorite, and Nasralla were discussing immunity from prosecution for current officials and carving up positions in government, two diplomats told Reuters on Tuesday.

With a booming, game-show host voice and finely coiffed hair, Nasralla is one of the country's best known faces, the host of programs that feature scantily clad women. In one interview, he boasted of his penis size and his sexual performance.

He is backed by leftist former President Manuel Zelaya, who was ousted in a coup in 2009 after he proposed a referendum on his re-election. The possible return of Zelaya risks fueling concern in Washington.

The United States has longstanding military ties to Honduras but few ideological allies among the current crop of Central American presidents.

Hernandez has won US praise for helping tackle a flow of migrants to the north and extraditing drug cartel leaders to the United States. He was credited with lowering the murder rate and boosting the economy, but was also hurt by accusations of ties to illicit, drug-related financing that he denies.

A foreign diplomat in Tegucigalpa, who asked not to be named, said the US would be concerned by a victory for the coalition led by "maverick" Nasralla.

But the diplomat added that a slim victory for Hernandez might be "the worst case scenario", as it would likely trigger protests and demands for a full vote count from an election tribunal with little credibility. 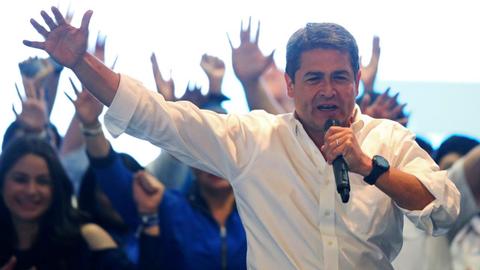