Isaias is expected to remain a hurricane through Monday, then slow weaken on its climb up the Atlantic seaboard.

Isaias has weakened to a tropical storm but is expected to re-strengthen to a hurricane overnight while it approached the southeast coast of Florida on Saturday.

The US National Hurricane Center (NHC) said on Saturday, it passed over the Bahamas as a hurricane and was expected to re-strengthen into a hurricane overnight as it approaches the US state's southeast coast.

Isaias was located about 185 kilometres (115 miles) southeast of Fort Lauderdale, Florida, with maximum sustained winds of 70 miles per hour, the NHC added.

From Bahamas to Florida

Isaias snapped trees and knocked out power as it blew through the Bahamas on Saturday and churned toward the Florida coast, threatening to complicate efforts to contain the coronavirus in places were cases are surging.

Isaias is piling another burden on communities already hard-hit by previous storms and the pandemic.

Florida authorities closed beaches, parks and virus testing sites, lashing signs to palm trees so they wouldn't blow away. The governor warned residents to expect power outages and asked to have a week's supply of water and food on hand. Officials wrestled with how to prepare shelters for people to seek refuge, if need be, while safely social distancing because of the virus.

Isaias is expected to remain a hurricane through Monday, then slow weaken on its climb up the Atlantic seaboard. It's expected to move offshore of the coast of Georgia en route toward the mid-Atlantic states. Heavy rain, flooding and high winds could batter much of the East Coast during the week.

One man died in the Dominican Republic and in Puerto Rico, the National Guard rescued at least 35 people from floodwaters that swept away one woman, whose body was recovered on Saturday after Isaias hit the area.

Concerns about the coronavirus and the vulnerability of people who are still recovering from last year's Dorian were adding to storm worries. 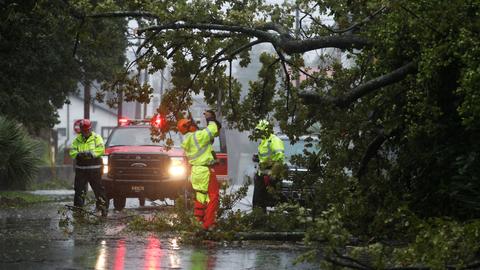 Hurricane Dorian rakes Carolinas as it moves up US coast