Google's report said the RCS spyware it uncovered, and which was dubbed "Hermit", is the same one that Lookout reported on previously.

An Italy-based firm's hacking tools have been used to spy on Apple and Android smartphones in Italy and Kazakhstan, Google said, casting a light on a "flourishing" spyware industry.

Google's threat analysis team said spyware made by RCS Lab targeted the phones using a combination of tactics including unusual "drive-by downloads" that happen without victims being aware.

"They claim to only sell to customers with legitimate use for surveillanceware, such as intelligence and law enforcement agencies," mobile cybersecurity specialist Lookout said of companies like NSO and RCS.

"In reality, such tools have often been abused under the guise of national security to spy on business executives, human rights activists, journalists, academics and government officials," Lookout added.

Google's report said the RCS spyware it uncovered, and which was dubbed "Hermit", is the same one that Lookout reported on previously.

Lookout researchers said that in April they found Hermit being used by the government of Kazakhstan inside its borders to spy on smartphones, just months after anti-government protests in that country were suppressed.

"Like many spyware vendors, not much is known about RCS Lab and its clientele," Lookout said. "But based on the information we do have, it has a considerable international presence."

"The vendors are enabling the proliferation of dangerous hacking tools and arming governments that would not be able to develop these capabilities in-house..."https://t.co/9usvcbSh8F

Analysis of Hermit showed that it can be employed to gain control of smartphones, recording audio, redirecting calls, and collecting data such as contacts, messages, photos and location, Lookout researchers said.

Google and Lookout noted the spyware spreads by getting people to click on links in messages sent to targets.

"In some cases, we believe the actors worked with the target's ISP (internet service provider) to disable the target's mobile data connectivity," Google said.

"Once disabled, the attacker would send a malicious link via SMS asking the target to install an application to recover their data connectivity."

When not masquerading as a mobile internet service provider, the cyber spies would send links pretending to be from phone makers or messaging applications to trick people into clicking, researchers said.

"Hermit tricks users by serving up the legitimate webpages of the brands it impersonates as it kickstarts malicious activities in the background," Lookout researchers said.

Google said it has warned Android users targeted by the spyware and ramped up software defences. Apple told AFP news agency it has taken steps to protect iPhone users.

Google's threat team is tracking more than 30 companies that sell surveillance capabilities to governments, according to the Alphabet-owned tech titan.

"The commercial spyware industry is thriving and growing at a significant rate," Google said. 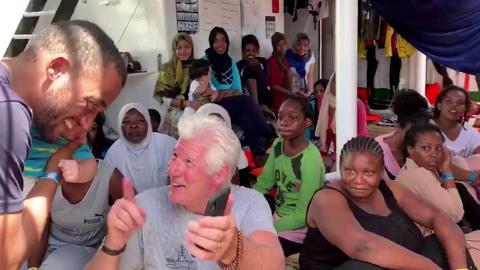