Venezuelan president says the delay is necessary as 35 newly-elected members need to be declared by electoral authorities. However, pressure builds as the attorney general opens investigation into election fraud.

Venezuelan President Nicolas Maduro postponed by 24 hours the launch of a powerful new assembly, in the face of opposition protests and blistering claims of fraud.

Attorney General Luisa Ortega, one of Maduro's biggest rivals, said she has opened an investigation into "scandalous" electoral fraud after the British technology firm contracted to handle the vote said Maduro had exaggerated the turnout.

Maduro denied the accusations of trampling on democracy in Venezuela with Sunday's controversial election for an all-powerful but unpopular Constituent Assembly, dismissing them as a "reaction by the international enemy." The new 545-member body – whose members include Maduro's wife and son – will have sweeping powers to dissolve the opposition-majority congress, pass laws and write a new constitution.

The Constituent Assembly was originally due to start work on Thursday, but Maduro postponed the launch to Friday in the face of opposition plans for massive protests.

"It has been proposed that the installation of the National Constituent Assembly, instead of being held tomorrow, be organised in peace and calm, with all necessary protocol, on Friday at 11 am (1500 GMT)," he said.

He said the reason for the delay was that 35 newly-elected members had not yet been officially declared by electoral authorities.

Venezuela has been rocked by four months of clashes at anti-Maduro protests that have left more than 125 people dead. Soon after the weekend vote for the Constituent Assembly, two prominent opposition leaders were hustled off to jail in the middle of the night by armed members of the Venezuelan intelligence services.

The firm, Smartmatic, said in a London news conference that the official figures from the election were "tampered with" to make turn out appear greater than it was.

Ortega said the firm's assessment was just "one more element of the fraudulent, illegal and unconstitutional process" initiated by the socialist ruler.

"We are facing an unprecedented, serious incident that represents a crime," Ortega told CNN.

The electoral authority itself – criticised as a Maduro mouthpiece – denied the vote-tampering allegation as "an irresponsible contention based on estimates with no grounding in the data."

Despite months of violent protests and international condemnation, Maduro insists the new assembly is the solution to a drawn-out economic and political crisis gripping Venezuela.

Countries around the world have condemned the assembly as a bid to indefinitely extend Maduro's rule. He is widely criticised for an economic crisis marked by triple-digit inflation and chronic shortages of food and medicine.

The US imposed direct sanctions on Maduro, calling him a "dictator," while the European Union joined the US, Mexico, Colombia and Argentina in saying it would not recognise the new assembly.

A question of voter manipulation

Smartmatic chief executive Antonio Mugica said, "We estimate the difference between the actual participation and the one announced by authorities is at least one million votes."

The opposition says turnout was closer to 3.5 million, mostly state employees fearful for their jobs.

Significantly, the opposition had held an unofficial referendum on July 16 in which it said 7.6 million Venezuelans voted against the new assembly – just under the level of support the government claimed on Sunday.

Because of an opposition boycott, it was a foregone conclusion that followers and allies of Maduro's Socialist Party would fill all the Constituent Assembly posts. So the turnout figure was the key gauge of public support.

Delcy Rodriguez, a former foreign minister who is now part of the new body, said the Constituent Assembly will kick the lawmakers out of the legislative palace, take it over and "never leave."

The US this week called Maduro a dictator, froze his US assets, and barred Americans from doing business with him. Maduro, like his predecessor and mentor, the late Hugo Chavez, regularly laughs off criticism from Washington even though the United States is Venezuela's top crude importer.

The European Union said it was mulling a "whole range of actions" on Venezuela.

But Maduro continues to enjoy public backing from the Venezuela's military, though soldiers are increasingly weary of the popular backlash against their role in quelling protests.

Oil workers, whom Maduro considers a bedrock of support, rallied in several energy producing regions of the country on Wednesday.

Chanting and carrying the red Socialist Party flag, they denounced sanctions on the leftist president.

"We are here to show our rejection of the intervention of the United States," one demonstrator said during a televised rally, calling the sanctions "a political show with harmful economic consequences for the people of Venezuela." 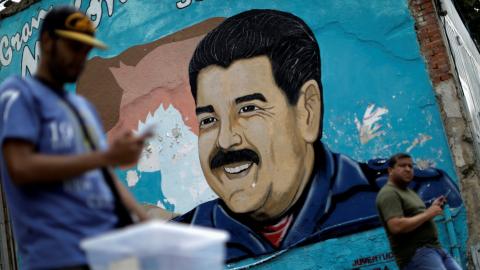 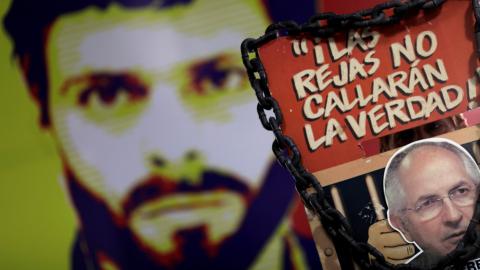 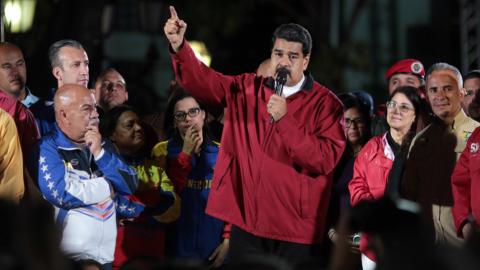 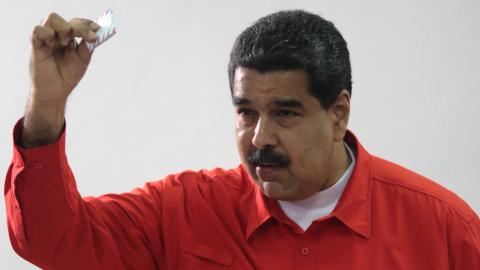 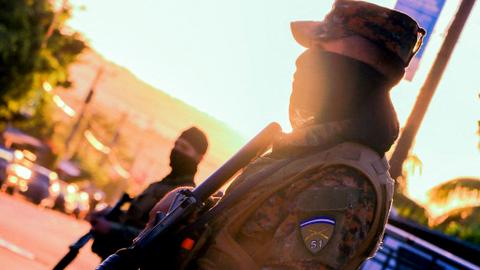 El Salvadoran city surrounded by 10,000 troops amid crackdown on gangs