It remains unclear if the agreement will reduce tensions on the streets of the liberal city, where nightly protests have persisted for more than two months.

Both US Department of Homeland Security Secratary Chad Wolf and Oregon Governor Kate Brown said on Wednesday that they had agreed to the plan after talks.

Wolf said, "That plan includes a robust presence of Oregon State Police in downtown Portland. State and local law enforcement will begin securing properties and streets, especially those surrounding federal properties, that have been under nightly attack for the past two months."

While each side declared victory in the political fight over the federal deployment, it was not clear if the agreement would reduce tensions on the streets of the liberal city, where nightly protests have persisted for more than two months.

Many demonstrators are peaceful, but smaller numbers have thrown fireworks, flares and rocks at federal agents, used lasers to blind them and sprayed graffiti across the downtown Mark O. Hatfield Federal Courthouse. Agents have responded with tear gas, pepper balls, stun grenades and nearly 100 arrests.

The deal also seemed likely to further muddle the situation by adding yet another law enforcement agency to the mix — Oregon State Police.

Some federal officers guarding the courthouse will leave in the next 24 hours, Brown said.

But the Trump administration's insistence that some agents would remain in the building and the entire contingent would stay in the city in case they're needed has sparked confusion and concern among demonstrators.

The Democratic governor said CBP and ICE agents will begin leaving the downtown area Thursday, but Wolf wouldn't specify where the agents would go.

He insisted that a federal presence would remain until the Trump administration was assured the agreement was working and state police were sufficiently protecting federal property.

The plan calls for agents with the US Marshals Service and Federal Protective Service to stay inside a fence set up around the courthouse, along with some state police, to keep out protesters. State police will be outside the fence.

“I want to be clear about this, the entire DHS law enforcement presence in Portland will remain in Portland, whether they’re staying inside the courthouse, next door or a different location, obviously I’m not going to get into that. If ... we have indicators and warnings that (the state police) deployment is not working, that entire DHS law enforcement presence is available.”

He said federal agents have made 94 arrests.

Oregon State Police Superintendent Travis Hampton said his agency would deploy a special operations team and some uniformed troopers to the courthouse for a two-week rotation.

The agency hopes its efforts will allow the protective fence to be removed and "restore a semblance of normalcy, while meeting community expectations and our obligations to protect the federal property, ” Hampton said.

The agreement also calls for the US government to clean the graffiti off the courthouse.

Portland Mayor Ted Wheeler, a Democrat, has previously said the federal government refused to clean the building, contributing to the mistaken impression that the entire city was under siege.

The conflicts between protesters and the federal agents have been limited to roughly two square blocks around the courthouse and have not affected the rest of the city.

READ MORE: US should ensure right to protest for demonstrators and media: UN

After my discussions with VP Pence and others, the federal government has agreed to withdraw federal officers from Portland. They have acted as an occupying force & brought violence. Starting tomorrow, all Customs and Border Protection & ICE officers will leave downtown Portland.

Wednesday's announcement was an abrupt about-face from just two days earlier, when the US government said it might send more federal agents to Portland.

In fact, the US Marshals Service were taking steps to identify up to 100 additional personnel who could go in case they were needed to relieve or supplement those working in Oregon, spokesperson Drew Wade said.

Like protests that swept the nation following George Floyd's death at the hands of Minneapolis police, the Portland demonstrations called for an end to racial injustice, but they had increasingly focused on federal property even before the US agents arrived.

The federal occupation of our community has brought a new kind of fear to our streets. Federal agents nearly killed a demonstrator, and their presence has led to increased violence and vandalism in our downtown core. https://t.co/dImlr5o6jw

No solution in sight

Their deployment against the wishes of state and city officials touched off a debate about the role of the federal government and ended up drawing more residents into the streets after protests had begun to devolve into smaller, though still violent, gatherings.

Oregon's governor cautioned that the lower visibility of the federal agents, and their ultimate departure, won't immediately resolve the conflict.

“I have grown increasingly concerned at the nightly confrontation between local community members and federal officers," Brown said.

"We need to recognise that the protests in Portland are not solely about the federal presence."

Many protesters want to see reduced funding for Portland police and are angry that officers used tear gas on protesters multiple times before federal agents arrived.

Brown said the departure of the agents was a chance to address that anger and start improving community policing. 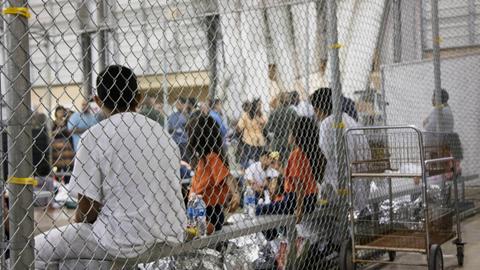 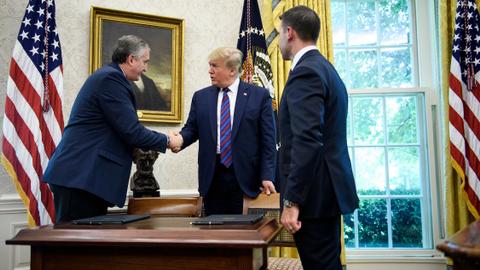