Opposition leader Noel Vidaurre was put under house arrest for "undermining the sovereignty" of the country, in the latest of a series of arrests condemned by the US and European Union.

Nicaraguan police have placed under house arrest a seventh presidential contender, meaning that almost all of those who could have challenged President Daniel Ortega in the November 7 elections have now been detained.

Opposition leader Noel Vidaurre was placed under police custody at his home on Saturday, as was political commentator Jaime Arellano. Arellano had been called in for questioning regarding a commentary he wrote criticising an Ortega speech.

Vidaurre was one of the potential presidential candidates of the Citizens for Liberty alliance.

The conservative alliance announced it had chosen as its candidate Oscar Sovalbarro, a leader of the US-supported “Contra” insurgency that fought the Sandinistas in the 1980s. It was not clear if Sovalbarro had accepted the nomination.

READ MORE: Why presidential candidates were detained in Nicaragua

Half a dozen other potential candidates have been arrested in a crackdown that began almost two months ago. Almost two dozen other journalists and opposition activists have also been detained.

Almost all were arrested under “treason” laws that Ortega has used against political rivals. Most face vague allegations of crimes against the state.

Another potential candidate, Cristiana Chamorro, is also under house arrest.

Most of those arrested in a crackdown that began in late May are being held incommunicado, at undisclosed locations with no access to lawyers or family visits.

They include Medardo Mairena, Felix Maradiaga and Miguel Mora.

Lesther Aleman – a former student leader who returned to Nicaragua after exile but stayed in safe houses – has also been detained.

And several of the leading Sandinista revolutionaries who fought alongside Ortega in 1979 have also been jailed by him.

Another is Víctor Hugo Tinoco, the leader of the political movement Unamos, is a former assistant foreign minister and former ambassador to the United Nations.

Ortega, 75, is seeking a fourth consecutive term in November 7 elections. 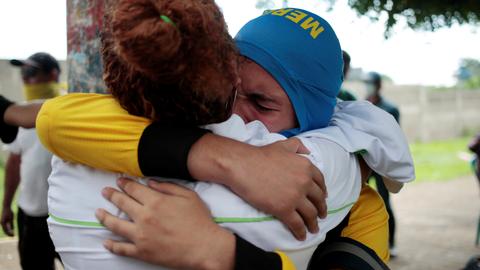