Pro-abortion advocates say they worry the potential loss of abortion rights, protected by the 1973 Roe v. Wade decision, across the US will greatly impact women's rights and their health, especially those from downtrodden communities.

With the Supreme Court poised to roll back half a century of abortion rights in the United States, pro-abortion Americans and campaigners are wondering what getting an abortion in the country — split over the issue — could look like.

Revoking the law won't stop abortions "but it will impact those who are less fortunate than others," Catherine Rowe, a pro-choice campaigner told TRT World outside the Supreme Court, where protests were held again on Wednesday by both pro and anti-abortion groups.

"Even in the past when abortions were illegal, they still happened. They just happened to be unsafe and in ways impacted a lot of communities, especially the poor who don't have much access to health care."

Demonstrators hit across the US as pro-abortion and anti-abortion advocates reacted to the leaked initial draft majority opinion which indicated the Supreme Court would overturn the 1973 Roe v. Wade decision, which legalised abortion nationwide.

According to reports, conservatives on the nation's highest court, by a 5-4 vote, would toss out the landmark Roe v. Wade decision.

Chief Justice John Roberts has confirmed the draft opinion was authentic but insisted it did not represent the "final position of any member."

But it has deepened the worries of pro-abortion Americans who say women's rights and their health is at stake.

"If the existing law goes away and bans are imposed on abortion, full or partial, it might lead to an increase in women's death rate," Rowe said.

To Gwen, a pro-abortion American who gave her first name only, the decision to end nationwide legal abortions "threatens democracy."

"Taking away women's control of their bodies by a bunch of people are views that are religious and political but not related to public health," she told TRT World.

"This has nothing to do with public health. It really threatens democracy."

US Supreme Court may overturn the landmark Roe v. Wade decision that protects women’s abortion rights nationwide according to a leaked document pic.twitter.com/PKh9kbbWoS

Roa v. Wade was considered a milestone in 1973 when the apex court ruled that pregnant women have the freedom to decide whether or not to abort an unborn child with no government meddling or curbs.

However, to anti-abortion Americans, "pro-choice is a lie" because "babies never choose to die."

Now if the law is overturned, pro-abortion Americans say it will increase violence against women, for there is no way to differentiate between those who wanted an actual abortion and who had a miscarriage.

"Many of the Republican states who want to outlaw abortion do not include an exception for rape, incest, and partner violence," Dylan Knight, who works in a restaurant as a receptionist, told TRT World.

He said he fears "there will be violence against women who have miscarriages."

"We’ve already seen a woman who had a miscarriage arrested on a charge of killing her fetus in a stillbirth."

Protests have erupted outside the US Supreme Court in Washington following reports that the court may overturn a landmark ruling that guarantees the right to abortion pic.twitter.com/iixEqtoTWj

Republicans have pushed hard for years to overturn the 1973 law, while Democrats have vowed to bring legislation to a vote that would codify a woman's right to terminate her pregnancy.

President Joe Biden has also warned the court ruling — if upheld — would reach far beyond the question of abortion, to "all the decisions related to your private life — whom you marry, whether or not you decide to conceive a child or not."

"A whole range of rights are in question," Biden said.

According to the Guttmacher Institute, 26 out of 50 US states are certain or likely to ban abortion if Roe v. Wade is overturned, leaving women in large swaths of the US Southwest and Midwest without nearby access to the medical procedure.

Overturning the abortion law would create divisions between people, especially the low-income families who wouldn't have enough money to travel across the country to get the abortion done legally "which would ultimately increase violence," said Gwen.

"People with enough wealth will find a way out. Overturning the law is racist and divisive, it sets classes differently," she said. 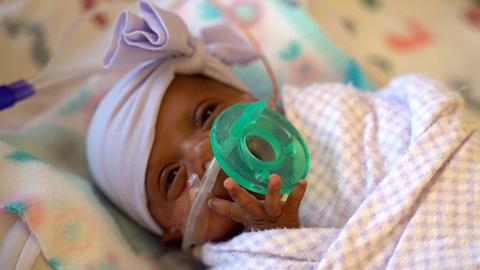 Girl believed to be tiniest newborn weighed as much as apple