Fiona is expected to become a hurricane as it nears Puerto Rico, threatening to dump up to 51 cms of rain as people brace for potential landslides, severe flooding and power outages.

Tropical storm Fiona has gained strength as it headed toward Puerto Rico, prompting the National Hurricane Center (NHC) to issue a hurricane warning for the US territory and watches for the US Virgin Islands.

One man was found dead in the French Caribbean island of Guadeloupe, after heavy rains from the massive storm swept away his house in the Basse-Terre district, local authorities said on Saturday.

The storm was located about 145 km southeast of St Croix with maximum sustained winds of 95 kph as of mid-afternoon, according to NHC. It was expected to become a hurricane on Sunday and into Sunday night, as it moved near Puerto Rico.

The island was braced for up to 30.5 cm of rain and high winds that could bring flooding, mudslides and power outages. Some areas could get as much as 51 cm of rain, the weather service said in a press conference.

"Hurricane conditions are expected across portions of Puerto Rico Sunday and Sunday night, and are possible across the US Virgin Islands (Saturday night) and Sunday," NHC said.

Heavy rains from Fiona were also due to spread to the Dominican Republican on Sunday and to the Turks and Caicos Islands on Monday night.

On Saturday, residents were bracing for possible severe power outages as the island's power grid still remains fragile after Hurricane Maria in September 2017. In that category 5 storm, 1.5 million customers lost electricity with 80 percent of power lines knocked out, causing the largest blackout in US history. 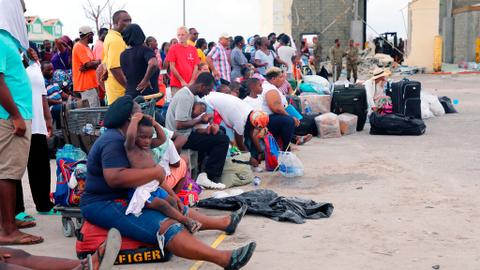