Hundreds of Central American migrants who tried to force through a Mexican police blockade into the United States retreated to a nearby camp after US border agents pushed them back with tear gas and rubber bullets.

Tension continued Tuesday as residents in the Mexican border city of Tijuana closed down a school next to a sports complex where more than 5,000 Central American migrants have been camped out for two weeks.

The move by the parent's association of the elementary school came after US border agents fired tear gas into Mexico to turn back a group of migrants who had breached the border over the weekend. The incident prompted Mexican authorities to step up the police presence around the shelter.

Citing fears for their children's safety, the parents bought their own lock and chain and closed the school's gates.

A sign on the gate said the school would remain closed until further notice.

Carmen Rodriguez said parents had been calling for authorities to do something since the migrants arrived, adding her 9-year-old daughter won't be returning to classes until they are gone.

"We are asking that they be relocated," Rodriguez said, noting some migrants had approached the school grounds to ask children for money, to use the school's bathrooms and that some smoked marijuana around its perimeter walls.

She said the parents worry about the anti-migrant protesters approaching the sports complex again, as they did last week.

"If they come here and there is a confrontation, we will be caught in the middle," she said.

The migrants themselves were urgently exploring their options amid a growing feeling that they had little hope of making successful asylum bids in the United States or of crossing the border illegally.

Most were dispirited after the US agents fired tear gas on the group of migrants trying to cross into the US on Sunday. They saw the clash and official response as hurting their chances of reaching the US.

There was a steady line Tuesday outside a tent housing the International Organization for Migration, where officials were offering assistance to those who wanted to return to their home countries.

Officials also reported more interest from migrants wanting to start the process of staying in Mexico. A job fair matching migrants with openings in Baja California saw a growing number of inquiries.

"What happened yesterday harms all of us," Oscar Leonel Mina, a 22-year-old father from San Salvador, El Salvador, said of Sunday's border clash.

Mina, his wife and their toddler daughter avoided the protest and were glad they did after hearing others recount what unfolded, he said, sitting outside his family's tent at the Tijuana sports complex and using a toothbrush to clean the fine dust that coats everything off his sneakers.

The events made Mina rethink his family's plan of making it to the US. He says he's heard people talk of Rosarito, a beach town popular with US tourists about a 40-minute drive south of Tijuana.

There "you can earn money and live well" if you're willing to work, he said. He set a goal of trying to move his family out of the sports stadium in another week.

Mexican security forces stepped up their presence at the complex where thousands from the migrant caravan have been sheltered, apparently seeking to avoid a repeat of Sunday's ugly scene.

Tijuana public safety secretary Marco Antonio Sotomayor Amezcua told a news conference that Mexican police would be prudent in their use of force, but "we have to guard at all cost that the border posts are not closed again."

Sotomayor said he hopes migrants who had thought of entering the US illegally learned from Sunday's events that that won't be possible.

Migrants hoping to apply for asylum in the United States must put their names on a waiting list that already had some 3,000 people on it before the caravan arrived in Tijuana. With US officials processing fewer than 100 claims a day, the wait time for the recent arrivals stands to take months.

That has instilled a sense of desperation among many after their gruelling trek from Central America.

Sunday's incident began after hundreds marched to the border to try to call attention to their plight. Some attempted to get through fencing and wire separating the countries, prompting the volleys of stinging gas.

Cindy Martinez of San Vicente, El Salvador, said she had been about to cross the concertina wire to the US side when the tear gas was launched. She estimated about 20 people had already passed in front of her, and parents begged agents not to unleash the gas because there were young children present.

"I see it as impossible for them to want to give us asylum," she said.

"Because of the words that President Donald Trump has said, I think this is impossible."

Martinez, 28, said she was now considering getting work in Tijuana.

Mexico's National Migration Institute reported that 98 migrants were being deported after trying to breach the US border. The country's Interior Department said about 500 people attempted to rush the border, while US authorities put the number at 1,000. 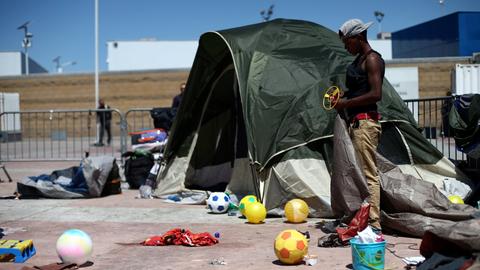 Remaning caravan migrants from Central America hopeful of entering the US 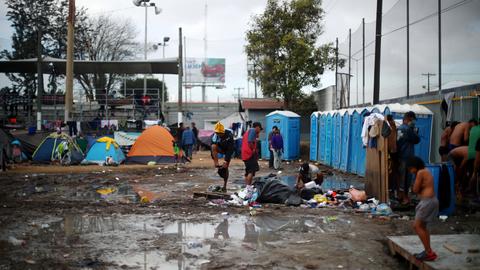