Tornado rips through US state of Kansas

In some neighbourhoods, homes were completely blown away by the twister that also injured three people, with one in serious condition.

A tornado that barrelled through parts of Kansas has damaged multiple buildings, injured several people and left more than 6,500 people without power.

Officials said on Saturday that the twister moved though parts of southeast Wichita and Andover on Friday evening.

Officials said only a few injuries had been reported. In Sedgwick County, three people were injured, including one woman who suffered serious injuries.

Crews have already finished a secondary search of homes in Andover. There are homes knocked completely off their foundations and entire neighbourhoods wiped out, but no serious injuries, Russell said.

Field crews from the National Weather Service worked Saturday to determine the extent and strength of the twister, said meteorologist Kevin Darmofal at the Wichita office.

City Hall also sustained damage, which hampered “some of our efforts,” Russell said.

In addition to the tornadoes, large hail was reported in several towns across the Plains. Hail the size of softballs was spotted near Holbrook, Nebraska, and Enterprise, Kansas, according to the National Weather Service and storm spotters. 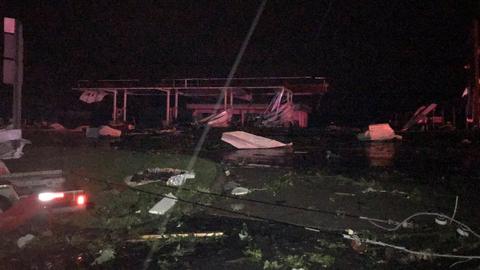