A legal advocacy group in the US “dedicated to fighting hate and bigotry” has exposed Miller’s correspondence with a former Breitbart editor over two years, promoting white supremacist stories and far-right theories.

The report is based on more than 900 leaked emails between Miller and Katie McHugh sent in 2015 and 2016. McHugh was an editor at Breitbart between April 2014 and June 2017 and was actively involved in the anti-immigrant movement.

McHugh, who recently leaked the emails to SPLC, was fired from her post in 2017 after posting anti-Muslim tweets. McHugh now says she has had a change of heart and is no longer supporting the far-right views she once espoused.

According to SPLC, Miller, who at the time of the correspondence was an aide to then-Senator Jeff Sessions, Republican of Alabama, sent McHugh links to far-right and white supremacist websites and pitched story ideas to be published at Breitbart.

The report is alarming because Miller is directly involved with White House immigration policy, which, since Trump came into power, has taken a turn towards a harder, stricter line.

“Miller is the most prominent architect of immigration policy within the White House,” McHugh pointed out. “And it’s easy to draw a clear line from the white supremacist websites where he is getting his ideas to current immigration policy.”

White House Press Secretary Stephanie Grisham called the SPLC an “utterly discredited, long-debunked far-left smear organisation”. Yet the New York Times describes the law center as “one of the nation’s wealthiest and best known legal advocacy groups” that has focused a significant amount of its resources “on exposing the work of extremist groups that espouse hateful ideologies”.

US President Donald Trump has a history of working with far-right advocates and following news from far-right outlets. Trump’s advisors have also defended and promoted far-right views. Steve Bannon, for instance, used to be Trump’s chief strategist and was a co-founder of far-right outlet Breitbart News. Bannon quit –– or was fired, according to Trump –– in August 2018, less than a week after activist Heather Heyer was killed in a “Unite the Right” rally in Charlottesville, NC.

In another instance of Trump’s slanted views, CNN reported in July that he did not invite representatives from Facebook or Twitter to the social media summit, but welcomed people such as Bill Mitchell, a radio host who has promoted the extremist QAnon conspiracy theory on Twitter; Carpe Donktum, an anonymous troll who won a contest put on by the fringe media organisation InfoWars for an anti-media meme; and Ali Alexander, an activist who attempted to smear Senator Kamala Harris by saying she is not an ‘American black’ following the first Democratic presidential debates.

CNN also listed other “eyebrow-raising” attendees including figures such as: “James O'Keefe, the guerrilla journalist whose group Project Veritas tried to trick reporters at the Washington Post by planting a source who told the paper that she had been impregnated as a teenager by failed Republican Senate candidate Roy Moore; Charlie Kirk, the founder of the right-wing student group Turning Point USA who sometimes posts misleading information on social media; and Benny Johnson, the journalist-turned-activist who was fired for plagiarism by BuzzFeed and demoted at the Independent Journal Review for violating company standards.”

Trump’s affiliation with supremacists and people holding racist views, as demonstrated with his “Build the Wall” campaign and ruthless separation of parents and children at the US-Mexico border, continues to be a reason for concern for many Americans. 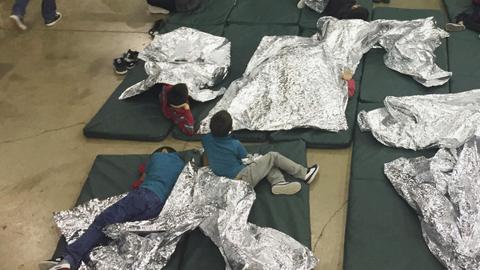