Heading into what could be the most-watched presidential debate in US history, Clinton and Trump will have to defend themselves from serious criticisms over their conflicting personalities​.

On Monday evening, tens of millions of people across the United States will gather to watch US presidential nominees Hillary Clinton and Donald Trump engage in their first face-to-face televised debate.

The five months of primary debates that saw dozens of candidates narrowed down to Trump and Clinton were already the most watched in history.

Monday's showdown could become the most watched presidential debate ever.

The outsider and the ultimate insider

The last time there was this much interest surrounding a debate was in 2008, when relative newcomer Sarah Palin faced off against Joe Biden in the vice presidential debate.

Like the Palin-Biden meeting, Monday's debate will pit a seasoned politician with decades of experience against an abrasive, controversial newcomer.

From the halls of the White House as a two-term First Lady, to the floor of the Senate, to the Situation Room as Secretary of State, over the last 30 years Clinton has seen US politics from nearly every angle.

During that time she also familiarised herself with the media. Her husband's headline-grabbing extramarital affairs made her a fixture in the tabloids, while her political aspirations saw her debating everything from healthcare to the War in Iraq on Sunday-morning talk shows.

Trump, on the other hand, is seen as a volatile, combative newcomer known more for his lavish hotels, reality shows and fiery feuds than his political prowess. Since the 1980s, the real estate magnate turned reality TV host has earned a reputation for an ego that has rivalled his opulent high rises and casinos.

Largely perceived as a battle between an avowed newcomer and a seasoned professional, Monday's debate will see the candidates' personalities, or lack thereof, put to the test.

According to an ABC News-Washington Post poll, only two points currently separate the candidates. With just 43 days until the November 8 ballot, this year's debates may have the rare possibility of swaying the vote. Both campaign teams are hoping their candidate's performance could lure the roughly 4.2 percent of undecided voters to their camp.

Even before they step foot in New York's Hofstra University, Clinton and Trump will have to try and overcome preconceived notions about their personalities.

Since 2008, when she first ran for president, Clinton has had to contend with a reputation of being stilted and robotic in her interactions. In short, she will have to prove she has a personality.

In January 2008, when she seemingly let her guard down and began to tear up during a campaign stop in New Hampshire. The coverage of the incident was an example of the media's inordinate focus on her personality.

In a subsequent New York Times opinion piece, columnist Maureen Dowd asked if Clinton could "Cry Her Way Back to the White House?" Dowd went on to accuse her of "Nixonian self-pity" expressed in what she labelled "a weirdly narcissistic way."

Whereas others saw the moment as a rare display of human emotion by an ardent politician, to Dowd the tears were "grimly typical" of Clinton, because "what finally made her break down was the prospect of losing."

This time round Clinton has faced renewed heat for a purported lack of candour on everything from her use of a private email server housed in her Brooklyn home during her tenure as Secretary of State, to her failure to disclose to the public that she was suffering from pneumonia.

Going into Hofstra, Clinton will face the dual challenge of having to seem relatable while proving she can convey concrete policy plans to address the major challenges facing the United States.

In his advice to Clinton, Obama told her to simply, "Be yourself and explain what motivates you."

Conversely, Trump has the opposite problem. He is seen as all bluster and no substance.

Ever since announcing his bid for the presidency on June 16, 2015, Trump has repeatedly made headlines for a series of controversial statements that have been characterised as xenophobic and jingoistic.

In December 2015, Trump called for a complete ban on Muslims entering the United States. That was followed in February by Trump saying he had "absolutely no problem" with "looking Syrian children "n the face" and telling them "they can't come" to the United States.

Trump's anti-refugee and anti-immigrant rhetoric, including calls for a wall to built along the US-Mexico border, which have been cornerstones of his campaign since day one, seem to have earned the mogul some fans.

On the eve of the debate, Trump's camp reported that for the first time ever the United States' 5,000 immigration officers and border security agents have endorsed a presidential candidate, him.

The Republican nominee himself has gone on to accuse President Obama and Clinton – who served as Secretary of State during Obama's first term – of founding DAESH and claiming that his Democratic opponent was the first to raise questions about Obama's birthplace, an issue he himself has raised consistently from 2011 until just last week. Both claims have been proven false.

In fact, according to one election tracker, Trump has made at least 89 falsifiable claims. Clinton has made just over two dozen.

Trump's opponents have capitalised on this reputation.

Billionaire investor Mark Cuban has even challenged Trump to a four-hour debate on policy issues. If he makes it through, Cuban is willing to give the Republican nominee $10 million.

This disparity, along with his notoriety as a combative, larger-than-life personality, means Trump will have to prove that he has concrete policies that can be backed up with verifiable facts.

Critics, including the editorial board of The New York Times, have pointed to the lack of details regarding his purported plan to fight DAESH as an example of Trump's inability to back up his fiery rhetoric with clearly presented plans.

According to an NBC News count, since he first announced his candidacy last June Trump has noticeably shifted his policy positions more than 100 times. For instance, barely six months after calling for a complete ban on Muslim immigration into the country, Trump told FOX News Radio that the ban was "only a suggestion."

Days before tonight's debate, Trump had already accused Lestor Holt, the debate moderator, of bias. The Republican nominee erroneously stated that: "Lester is a Democrat." The NBC Nightly News anchor is in fact, a registered Republican.

The debate will also be a test for Holt after his NBC colleague Matt Lauer was roundly criticised for his handling of a forum focusing on national security earlier this month. In the "Commander In Chief Forum," Lauer separately grilled Clinton and Trump on matters of national security but was quickly rebuked for overly focusing on Clinton's emails and being too soft on Trump. 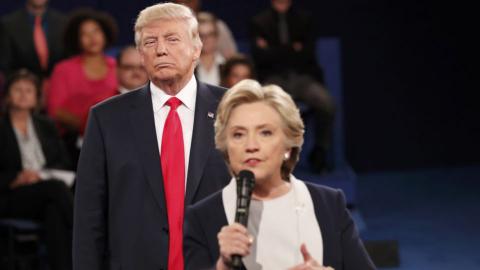 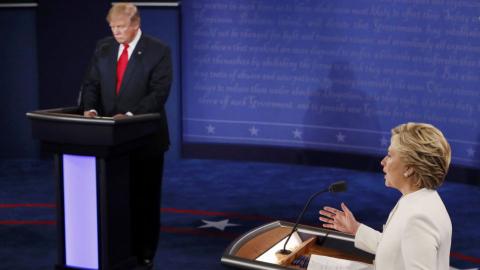