While US President Donald Trump views the latest offer as a compromise, Democrats have already dismissed his proposal before the formal rollout, continuing to oppose money for border wall.

US President Donald Trump sought to break the government shutdown impasse on Saturday, offering to extend protections for young people brought to the country illegally as children, if Democrats give him $5.7 billion for his long-promised border wall.

But Democrats dismissed the offer as non-starter, calling on Trump to re-open the government first.

Administration officials said that the proposal to extend temporary protections to young people brought to the country illegally would apply only to the approximately 700,000 people currently enrolled in the Obama-era program shielding them from deportation, and not all those who could be eligible.
The plan would offer no pathway to citizenship for those immigrants — a deal breaker for many Democrats.

Speaking from the White House, Trump said he was offering a "commonsense compromise both parties should embrace."

Key elements of his proposal included $800 million earmarked for humanitarian purposes,  $805 million for "drug detection technology to secure ports of entry", in addition to  2750 border agents and law enforcement officials and 75 immigration judge teams to reduce court backlogs of "900,000 cases."

Democrats, however, criticized Trump's proposal for failing to offer a permanent solution for the immigrants in question and because he refuses back away from his demand a wall along the U.S.-Mexico border, which the party strongly oppposes. Democrats have told Trump he must reopen government before talks can start.

Trump had repeatedly dismissed the idea of a deal involving Dreamers in recent weeks, saying he would prefer to see first whether the Deferred Action for Childhood Arrivals program, or DACA, survived a court challenge.

On Friday, the Supreme Court took no action on the Trump administration's request to decide by early summer whether Trump's bid to end that program was legal, meaning it probably will survive at least another year.

But during a recent trip to the U.S.-Mexico border, Trump hinted at the possibility, saying he would consider working on the wall and DACA "simultaneously."

A previous attempt to reach a compromise that addressed the status of "Dreamers" broke down a year ago as a result of escalating White House demands.

'Not a good faith effort'

In advance of Trump's remarks, House Speaker Nancy Pelosi said the expected proposal for ending the 29-day partial government shutdown was "a compilation of several previously rejected initiatives, each of which is unacceptable."

The California Democrat said Trump's expected offer was "not a good-faith effort" to help the immigrants and could not pass the House.

Trump said he would extend protections for young people brought to the country illegally as children, as well as for those with temporary protected status after fleeing countries affected by natural disasters or violence.

Democrats criticized the expected proposal because it didn't seem to be a permanent solution for those immigrants and because it includes money for the wall along the US-Mexico border, which the party strongly opposes. 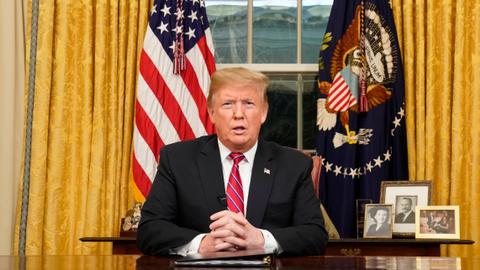