US President Donald Trump's comments came after his meeting with Japanese Prime Minister Shinzo Abe, who was in Washington amid intense diplomatic flurry over the future of the Korean peninsula.

US President Donald Trump said on Thursday it was possible he and North Korean leader Kim Jong-un could sign an agreement to end the Korean War at their June 12 meeting in Singapore and that he would someday like to normalise relations with Pyongyang.

“Well it could be, we could sign an agreement, as you know that would be a first step ... but yes ... we’re looking at it, we’re talking about it with a lot of other people ... that’s probably the easy part, the hard part remains after that,” Trump said in answer to a question at a joint news conference with Japanese Prime Minister Shinzo Abe.

Trump said he would “certainly” invite Kim to visit the United States if summit negotiations in Singapore go well. But he said he was also “totally prepared to walk” if things don’t go well, noting that he “did it once before.”

Trump and Abe met at the White House, before heading to Canada for what promises to be a tense Group of Seven summit clouded by the US leader’s aggressive trade policies.

But before tackling the thorny trade issue, Trump expressed unbridled optimism — and confidence — about his June 12 tete-a-tete with Kim in Singapore.

“The summit is all ready to go,” Trump said, with Abe at his side. “It’s going to be much more than a photo op.”

“I’m very well-prepared. It’s about attitude, it’s about willingness to get things done,” he told reporters.

Since the first inkling that a Trump-Kim summit could be on the cards, Japan has repeatedly insisted that Washington be mindful not to let its guard down with the nuclear-armed regime in Pyongyang.

And by coming to Washington to see Trump for the second time in less than two months, Abe wants to be sure to get his point across to the US president, amid the intense diplomatic flurry over the future of the Korean peninsula.

The Japanese leader said he hoped the summit would lead to “greater peace and stability” in the region, and mark a “transformational moment” for Northeast Asia.

Before leaving Tokyo, Abe clearly outlined what would need to happen for the summit to be a success: tangible progress on curbing the North’s nuclear and ballistic missile programmes, as well as answers about Japanese nationals kidnapped by Pyongyang in the 1970s and 1980s.

During their last meeting at Trump’s Florida retreat in April, the US president promised Abe to raise the politically sensitive abductions issue in any talks with Pyongyang.

But the subject is hardly a priority for the businessman-turned-president, whose strategy appears to be in constant flux.

Above all, Trump seems most enthused by the notion of being the first sitting US leader to hold direct talks with a scion of the ruling Kim dynasty.

“At a minimum, we’ll start with perhaps a good relationship and that’s something that is very important toward the ultimate making of the deal,” he added.

“If they don’t denuclearise, it will not be acceptable.”

The intensifying diplomacy on North Korea has so far left Abe as the odd man out: Trump is preparing to meet Kim, while Chinese President Xi Jinping and South Korea’s Moon Jae-in have each already seen the North’s leader twice.

For Richard Armitage, a former senior diplomat in the George W Bush administration, Tokyo runs a very real risk of finding itself out in the cold after the Trump-Kim talks.

“We should absolutely prevent decoupling Japanese and US security,” he told AFP.

“This is and has been an aim of China and North Korea for a long time, and we can’t allow this to happen. That would be falling into a terrible trap.”

Trump and Abe so far seem to have forged a friendship of sorts, but even that bonhomie was revealed to be limited at their last meeting.

On Thursday, it could again be put to the test — beyond North Korea, they are also meant to discuss the controversial issue of tariffs, which Washington says were put in place to protect American workers.

“I will stress that measures to restrict trade would not serve the interests of any country,” Abe said before heading to Washington.

Japan had hoped to convince the US to shield it from fresh tariffs on steel and aluminium imports, and did not hide its bitter disappointment when those talks failed. 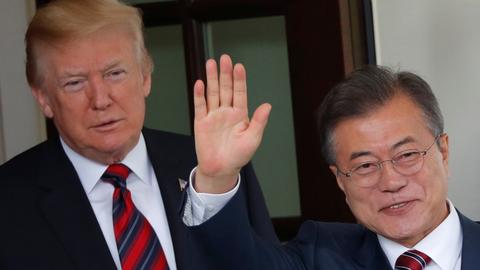