The arms deal was the central achievement of Trump's first day in Riyadh. But the political turmoil back in Washington continued to remain the focus of US media, casting a long shadow over his first overseas trip.

Embattled US President Donald Trump made agreements worth hundreds of billions of dollars including a $110 billion arms deal with Saudi Arabia on Saturday as he kicked off his maiden foreign trip.

The trip comes in the backdrop of his controversial firing of the FBI director James Comey that led one of the Democrat Congressmen to call for his impeachment.

The arms deal was the central achievement of Trump's first day in Riyadh, first of his six-stop journey to the Middle East and Europe.

According to US Secretary of State Rex Tillerson, the deals could total up to $380 billion.

Speaking to journalists after a ceremony to exchange agreements, Trump said it was a "tremendous day".

"It's hundreds of billions of dollars of investments into the United States and jobs, jobs, jobs. So I would like to thank all of the people of Saudi Arabia."

King Salman gave Trump a remarkably warm greeting, meeting him at the steps of Air Force One on arrival, and shaking the hand of Trump's wife, Melania.

The Saudi king also rode with Trump in his limousine and spent most of the day with him.

But the political turmoil back in Washington continued to remain the focus of US media, casting a long shadow over his first overseas trip.

His firing of Comey on May 9 and the appointment of a special counsel to investigate Trump's 2016 presidential election campaign ties to Russia have raised the question of whether he tried to halt a probe into allegations.

Fanning the flames was a New York Times report that Trump had called Comey a "nut job" in a private meeting last week in the Oval Office with Russian Foreign Minister Sergei Lavrov and ambassador Sergei Kislyak.

The New York Times quoted briefing notes of the conversation.

Asked for a response, the White House said that for national security reasons, "we do not confirm or deny the authenticity of allegedly leaked classified documents."

Russia's Interfax news agency on Saturday quoted Lavrov as saying he had not discussed Comey with Trump. "We did not touch this issue at all," the minister said.

In another development, the Washington Post said a current White House official close to Trump was a significant "person of interest" in the investigation into possible ties with Russia.

Saudi foreign minister Adel al-Jubeir called the results of Trump's meetings with the Saudi king as "the beginning of a turning point" between the United States, Saudi Arabia and its Gulf allies.

Both he and Tillerson made clear the arms deal was aimed at countering Iran on a day that Hassan Rouhani was re-elected as Iran's president.

Tillerson said Rouhani should use his second term to end Iran's ballistic missile testing and stop promoting extremism in a volatile region.

Trump's trip to Saudi Arabia, Israel, Italy, the Vatican and Belgium has been billed by the White House as a chance to visit places sacred to three of the world's major religions, while giving Trump time to meet with Arab, Israeli and European leaders. 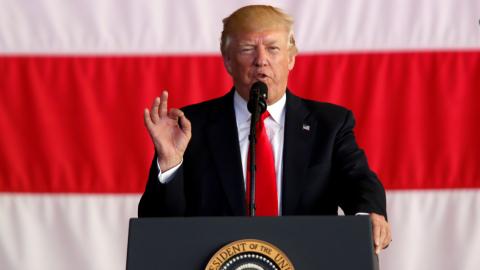 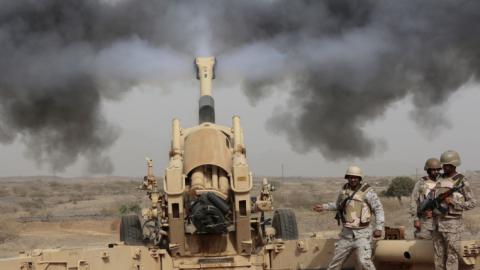 US Senator will try to block Saudi arms deal