Epstein was taken off a suicide watch last month for reasons that have not been explained and was supposed to have been checked on by a guard every 30 minutes.

The warden at the federal jail where Jeffrey Epstein took his own life over the weekend was removed Tuesday and two guards who were supposed to be watching the financier were placed on leave while federal authorities investigate the death.

The move by the Justice Department came amid mounting evidence that the chronically understaffed Metropolitan Correctional Center may have bungled its responsibility to keep the 66-year-old Epstein from harming himself while he awaited trial on charges of sexually abusing teenage girls.

Epstein was taken off a suicide watch last month for reasons that have not been explained and was supposed to have been checked on by a guard every 30 minutes.

But investigators learned those checks weren't done for several hours before he was found Saturday morning, according to a person familiar with the case who was not authorised to discuss it and spoke on condition of anonymity.

Attorney General William Barr ordered warden Lamine N'Diaye temporarily assigned to the Bureau of Prisons' regional office while the FBI and the Justice Department's inspector general investigate. The two guards were not identified.

While the exact manner of Epstein's death has not been officially announced, a second person familiar with operations at the jail said the financier was discovered in his cell with a bedsheet around his neck. That person likewise spoke on condition of anonymity for the same reason.

Under the jail's protocol, Epstein would not have been given a bedsheet had he been on suicide watch. He was placed on suicide watch last month after he was found on the floor of his cell with bruises on his neck, but he was later returned to the jail's special housing unit for inmates needing close supervision.

The Bureau of Prisons sent a team of prison psychologists, known as a suicide reconstruction team, to the jail on Tuesday, a Justice Department official said.

They are expected to reconstruct the scene, analyse why Epstein took his own life and look at how it happened, the official said. The official couldn't discuss the matter publicly and spoke on condition of anonymity.

The official said Deputy Attorney General Jeffrey Rosen was being briefed by the FBI every three hours on the progress of their investigation.

On Monday, Barr said that he was "frankly angry to learn of the MCC's failure to adequately secure this prisoner," adding: "We will get to the bottom of what happened and there will be accountability."

The warden of an institution in upstate New York has been named the acting warden at the jail.

Eric Young, president of the union council that represents prison guards, said that such reassignments are routinely done to "protect the integrity of investigations until any formal action, if any, is warranted."

Jose Rojas, a union leader and teacher at a federal prison in Florida, said N'Diaye should be home without pay instead of being reassigned. He said it appears to him that the Bureau of Prisons is "protecting him and putting the blame on officers."

"I put this on the warden," he said. "If he would have had common sense and followed policy, we wouldn't be here discussing this."

More details began to emerge Tuesday about the guards who were supposed to be supervising Epstein and the conditions under which they were working.

The guards on Epstein's unit the night of his apparent suicide were working overtime shifts to make up for staffing shortages, two people familiar with the matter said.

One of the guards, who had a different job in the jail and did not regularly perform correctional officer duties, was working a fifth straight day of overtime and the other guard was working mandatory overtime, the people said.

Although the one guard doesn't currently regularly work as a correctional officer, he had previously been one for seven years and specifically requested to work overtime shifts to make more money, one of the people said.

The prison has been pressing non-custodial staff into working as correctional officers because staffing levels are less than 70 percent of what they should be, union officials said.

The Bureau of Prisons considers all employees "correctional workers" and trains them in "basic correctional duties to secure the facility in the event of a disturbance and to provide inmate supervision," according to a 2012 Government Accountability Office report on overcrowding.

All new employees are sent to a training academy in Georgia for a three-week "Introduction to Correctional Techniques" course that covers firearms, self-defence, policies and procedures.

They must also pass a physical abilities test that measures their "ability to perform the essential functions of a correctional worker," such as detecting movement, climbing ladders and using handcuffs.

Epstein was being held without bail on federal sex trafficking charges that could have brought 45 years in prison.

Federal prosecutors in New York are pursuing a parallel investigation into whether any of his associates will face charges for assisting him in what authorities say was his rampant sexual abuse of girls as young as 14.

According to police reports, FBI records and court documents, Epstein had a team of recruiters and other assistants who knew of his penchant for girls and lined up victims for him. 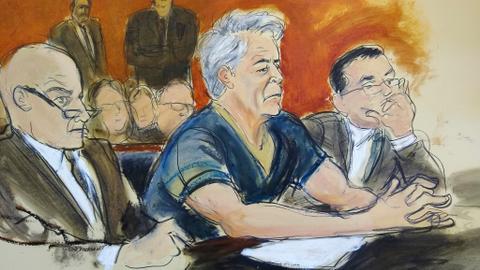