Growing numbers are fleeing economic meltdown and political turmoil in Venezuela, where people scrounge for food and other necessities of daily life, threatening to overwhelm neighbouring countries.

The exodus of migrants from Venezuela is building toward a "crisis moment" comparable to events involving refugees in the Mediterranean, the United Nations migration agency said on Friday.

Growing numbers are fleeing economic meltdown and political turmoil in Venezuela, where people scrounge for food and other necessities of daily life, threatening to overwhelm neighbouring countries. Officials from Colombia, Ecuador and Peru will meet in Bogota next week to seek a way forward.

In Brazil, rioters this month drove hundreds back over the border. Peru this month tightened entry rules for Venezuelans, requiring them to carry passports instead of just national ID cards, though a judge in Ecuador on Friday rolled back a similar rule enacted there.

Describing those events as early warning signs, a spokesman for the International Organization for Migration (IOM), Joel Millman, said funding and means of managing the outflow must be mobilised.

"This is building to a crisis moment that we've seen in other parts of the world, particularly in the Mediterranean," he told a news briefing.

On Thursday, the IOM and UN refugee agency UNHCR called on Latin American countries to ease entry for Venezuelans.

Venezuelans are rushing out of the country to join those who have already fled a deepening economic crisis, as regional governments struggle to cope with one of the biggest exoduses in Latin American history.

The UN says more than 2.3 million of Venezuela's 30.6 million population have fled the country since the current crisis began in 2014 – a staggering 7.5 percent.

The pace of departures has accelerated in recent days, sparking a warning from the UN.

"It remains critical that any new measures continue to allow those in need of international protection to access safety and seek asylum," UN High Commissioner for Refugees Filippo Grandi said on Thursday in a statement.

The UN said up to 4,000 people were arriving daily in Ecuador, Peru, Colombia and Brazil.

Peru's top immigration official, Eduardo Sevilla, said Peru will exempt some Venezuelans from the passport requirement, including parents with children seeking to join the rest of their family, pregnant women and the gravely ill.

But Sevilla said authorities would also be vigilant of attempts to evade the new rule by claiming refugee status.

"Is UNHCR going to take responsibility if that person commits a crime?" Sevilla said to Reuters on Friday. "Our priority is to contribute to security and internal order by clearly identifying people."

UNHCR spokesman Andrej Mahecic said on Friday that governments had made "commendable" efforts even though some reception capacities and services were overwhelmed.

But he said "some disturbing images" had emerged from the region in the past week that risked stigmatising Venezuelans who had fled and complicating efforts to integrate them.

An Ecuadorean judge, Judith Naranjo, on Friday lifted an order requiring that Venezuelans hold passports to be allowed entry, in response to a lawsuit filed by Ecuador's state ombudsman together with local human rights groups.

"The judge accepted the request for the precautionary measures requested by the ombudsman," the agency wrote on Twitter.

The ruling gives the government 45 days to develop a plan to address the situation of Venezuelan migrants.

Ecuadoran Interior Minister Mauro Toscanini said there were currently 35 busloads of migrants on the move along the route authorities had opened to Peru.

"We are going to continue as long as we can," said the minister, whose country is being crossed by tens of thousands of Venezuelans seeking to join relatives and take up work opportunities in Peru, Chile and beyond.

Peru's new passport rules however threaten to leave tens of thousands of Venezuelans stranded in Ecuador and Colombia, who are already inundated with migrants from the crisis-wracked country.

UN Secretary-General Antonio Guterres will set up a special UN team to ensure a coordinated regional response to the crisis, his spokesman Stephane Dujarric said on Friday.

Ecuador will host a 13-nation regional summit next month to discuss the crisis.

In Tumbes, on the Peruvian side of the border with Ecuador, lines of people waited to have their papers checked, sweating in the tropical heat.

Only around half of the Venezuelans fleeing their homes and the economic chaos there are carrying passports, according to Colombia's migration director, Christian Kruger. The other half have identity cards.

Like Colombia, Peru has been struggling to cope. Earlier this month, a record 5,100 people entered the country in a single day.

Venezuela's information minister, Jorge Rodriguez, said on Friday that a new package of economic measures meant to address hyperinflation would win over Venezuelans who had left the country.

Venezuela on Monday cut five zeros from prices and pegged the country's currency to an obscure state-backed cryptocurrency. Critics slammed the plan as inadequate in the face of inflation that topped 82,000 percent in July and is expected to reach 1 million percent this year.

"The conclusion is that Venezuelans are going to return and furthermore we invite them to return because we need them for this recovery plan," Rodriguez told a news conference.

Under President Nicolas Maduro's leadership, Venezuelans are suffering from severe shortages of food, medicine and other basic necessities, while public services have been failing.

Industry is operating at only 30 percent, hit hard by the crash in oil prices since 2014 in a country that earns 96 percent of its revenue from crude. 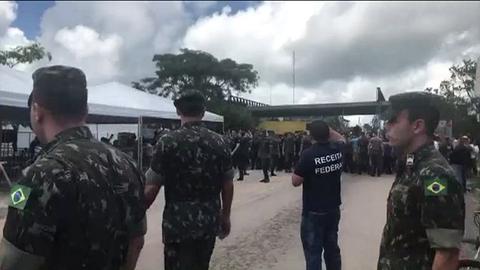