The embargo on conventional arms is due to expire in mid-October, as agreed under the 2015 nuclear deal among Iran, Russia, China, Germany, Britain, France and the United States.

The United Nations Security Council has rejected a US resolution to extend an Iranian arms embargo in a move with repercussions for the Iran nuclear deal.

"The Security Council's failure to act decisively in defense of international peace and security is inexcusable," US Secretary of State Mike Pompeo said on Friday in a statement ahead of the council announcing the results of the vote.

The US has become increasingly isolated over Iran at the Security Council since President Donald Trump pulled it out of the Iranian nuclear deal in May 2018.

The vote in the 15-member council was two in favour, two against and 11 abstentions, leaving it far short of the minimum nine “yes” votes required for adoption. Russia and China strongly opposed the resolution but didn’t need to use their vetoes.

Embargo set to end in October

The embargo on conventional arms is due to expire on October 18 under the terms of a resolution that blessed the Iran nuclear deal, signed in July 2015 and officially known as the Joint Comprehensive Plan of Action (JCPOA).

Under the deal, negotiated by then US president Barack Obama, Iran committed to curtailing its nuclear activities for sanctions relief and other benefits.

Since Trump pulled out and slapped unilateral sanctions on Iran under a campaign of "maximum pressure," Tehran has since taken small but escalating steps away from compliance with the nuclear accord as it presses for sanctions relief.

European allies of the United States – who, along with Russia and China, signed the deal with Iran – have voiced support for extending the conventional arms embargo but their priority is to preserve the JCPOA.

The US text, rejected by the Security Council and seen by AFP, effectively called for an indefinite extension of the embargo on Iran.

Diplomats feared that the resolution would threaten the nuclear agreement.

Iran says it has the right to self-defence and that a continuation of the ban would mean an end to the nuclear deal.

The United States has threatened to try to force a return of UN sanctions if it is not extended by using a controversial technique called "snapback."

Pompeo has offered the contested argument that the United States remains a "participant" in the nuclear accord as it was listed in the 2015 resolution – and therefore can force a return to sanctions if it sees Iran as being in violation of its terms.

Brian Hook, the outgoing US envoy for Iran, told reporters on Thursday that Iran backs Hezbollah militants in Lebanon and proxies elsewhere in the Middle East, and is responsible for over 600 American deaths in Iraq and thousands of wounded.

He underscored the support for the indefinite arms embargo extension from the six feuding nations in the Gulf Cooperation Council – Bahrain, Kuwait, Oman, Qatar, Saudi Arabia and the United Arab Emirates.

European allies have been sceptical on whether Washington can force sanctions and warn that the attempt may delegitimise the Security Council.

Experts say a "snapback" could plunge the Council into one of its greatest ever diplomatic crises. 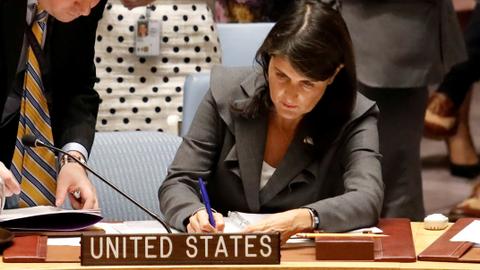