US authorises embassy staff to leave Ethiopia as conflict escalates

Ethiopia declares a state of emergency as Tigray rebels threaten to advance on the capital.

The United States embassy in Addis Ababa has authorised the voluntary departure of non-emergency government staff and family members because of armed conflict in Ethiopia.

"On November 3, the (State) Department authorized the voluntary departure of non-emergency U.S. government employees and family members of emergency and non-emergency employees from Ethiopia due to armed conflict, civil unrest, and possiblesupply shortages," the embassy said on its website on Thursday.

The step came after the US said on Wednesday it was "gravely concerned" about the escalating violence and expansion of hostilities in Ethiopia.

On Tuesday, Ethiopia declared a state of emergency, with rebels from the northern region of Tigray threatening to advance on the capital, Addis Ababa.

The government has denied rebel claims of gains but declared a nationwide state of emergency and ordered residents of Addis to prepare to defend their neighbourhoods.

Efforts to calm Ethiopia’s escalating tension have so far failed as Ethiopian government officials and leaders of Tigray rebel group refuse to talk.

Instead, Prime Minister Abiy Ahmed called on citizens to rise up and “bury” the Tigray forces.

The lack of dialogue “has been particularly disturbing,” Kenyan President Uhuru Kenyatta said in a statement on Thursday.

In Washington, the US State Department said it was sending Jeffrey Feltman, special envoy for the Horn of Africa, to the country this week, in a new bid to break the deadlock.

Feltman is due to hold talks on Thursday and Friday to urge "all Ethiopians to commit to peace and resolution of grievances through dialogue," it said.

The spokesperson for Prime Minister Abiy Ahmed, Billene Seyoum, did not immediately respond on Thursday when asked whether he would meet with Feltman. 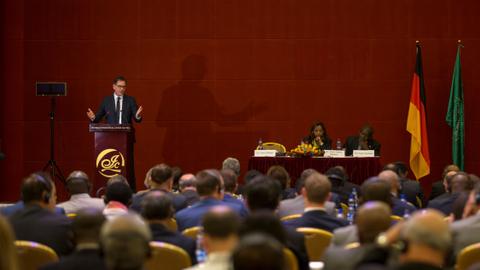 A Marshall plan for Africa?